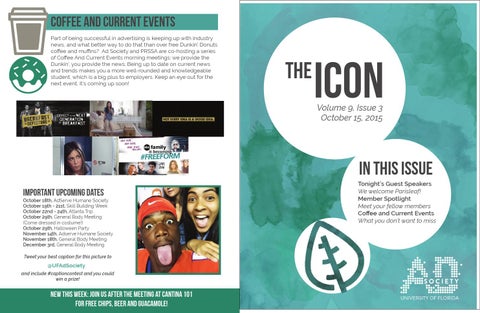 Coffee and current events Part of being successful in advertising is keeping up with industry news, and what better way to do that than over free Dunkin’ Donuts coffee and muffins? Ad Society and PRSSA are co-hosting a series of Coffee And Current Events morning meetings: we provide the Dunkin’, you provide the news. Being up to date on current news and trends makes you a more well-rounded and knowledgeable student, which is a big plus to employers. Keep an eye out for the next event, it’s coming up soon!

@UFAdSociety and include #captioncontest and you could win a prize!

New this week: Join us after the meeting at cantina 101 for free chips, beer and guacamole!

Alexander Duran, freshman So, why advertising? If you would have asked eighth grade me what I wanted to do in the future, I would have probably said I wanted to be a doctor. I had always loved making videos as a kid, but I never thought I could use my creativity to build a career. I also liked the idea of entrepreneurship, which led me to find advertising, a sort of bridge between the creative and business worlds. I am also kind of obsessed with technology, so advertising, which relies on technology for almost anything, especially nowadays, is a perfect fit. How did you get involved with the agency? When I was researching UF’s advertising major during my senior year of high school, I stumbled upon the yet to be completed website for The AGENCY. I actually submitted an application when I was still in high school to be a copywriter at The AGENCY but I never heard back. I then learned more about The AGENCY through mutual friends that attended UF and eventually emailed the catalyst manager, Ryan. Ryan and I emailed each other back and forth for a while and I told him about the internship I had at the time at a small advertising firm in Miami. I sent him my resume and pretty much went to work from there. Do you have any kind of life advice or a motto that you live by? “Do epic sh*t.” What are your main goals for this year? For all of your time at UF? I’m in the process of starting up a YouTube channel, so I hope to have a solid amount of videos up before the end of this year. In The AGENCY, I want to transition to a more creative role that involves me making videos. I also want to land a summer internship at an agency like Zubi, SapientNitro, or 72andSunny (my favorite agency). By the end of my time at UF, I hope to be a part of the team that really defines what The AGENCY is. The AGENCY is currently still setting down a lot of the groundwork for it to prosper in the future and I hope that I can be an influential part of that future, defining our role in an industry that is constantly changing. I also want to stay involved within Ad Society and continue making videos for fun on my YouTube channel. If you could represent any brand or product, which would you choose? That’s easy. I would choose Google. I think Google’s mission statement is the greatest thing ever: “to organize the world’s information and make it universally accessible and useful.” A company like Google is able to generate massive income while improving the world in everything it does. Working for Google, more specifically, YouTube, is another one of my dream jobs.

And coming up next week: Keep up the awesome work, Alex! We love recognizing our outstanding members. If you know someone who deserves a spotlight, email mmundo@ufl.edu.

Parisleaf is a branding and digital studio located here in Gainesville. Built around the idea that advertising and branding should create emotional resonance, Parisleaf always strives to evoke a reaction. The studio specializes in web design and provides copywriting, graphic design, photography, video and animation services. Teamwork is highly valued at Parisleaf, and their team works tirelessly to create work bigger than themselves. ​Chad Paris: Chad wanted to own the happiest business in the world and that goal fuels everything he does. Chad’s role is all about relationships and communication with clients and with the Parisleaf team. Chad’s passion lies in giving back to the community— some may call this networking.

Larry Werner: If you’re looking for the perfect setup, punchline, and tag to a joke, or you need to uncover the soul of a brand, Larry is there with bearded smile and worn out notebook. A tried-and-true wordsmith, his career has been defined by incredible experiences working at Red Tettemer where he worked on accounts like the Pennsylvania State Tourism Board, and Ogilvy & Mather where he worked with clients like IBM and Shell. Larry brings core and quip to every project with a touch of Zen. Maybe it’s all that surfing he does to relax on the weekends.