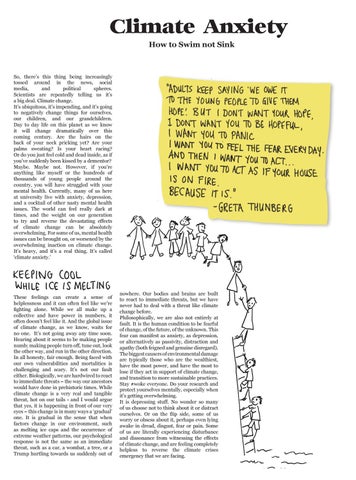 Climate Anxiety: How to Swim not Sink

So, there’s this thing being increasingly tossed around in the news, social media, and political spheres. Scientists are repeatedly telling us it’s a big deal. Climate change. It’s ubiquitous, it’s impending, and it’s going to negatively change things for ourselves, our children, and our grandchildren. Day to day life on this planet as we know it will change dramatically over this coming century. Are the hairs on the back of your neck pricking yet? Are your palms sweating? Is your heart racing? Or do you just feel cold and dead inside, as if you’ve suddenly been kissed by a dementor? Maybe. Maybe not. However, if you’re anything like myself or the hundreds of thousands of young people around the country, you will have struggled with your mental health. Currently, many of us here at university live with anxiety, depression, and a cocktail of other nasty mental health issues. The world can feel really dark at times, and the weight on our generation to try and reverse the devastating effects of climate change can be absolutely overwhelming. For some of us, mental health issues can be brought on, or worsened by the overwhelming inaction on climate change. It’s heavy, and it’s a real thing. It’s called ‘climate anxiety.’

These feelings can create a sense of helplessness and it can often feel like we’re fighting alone. While we all make up a collective and have power in numbers, it often doesn’t feel like it. And the global issue of climate change, as we know, waits for no one. It’s not going away any time soon. Hearing about it seems to be making people numb; making people turn off, tune out, look the other way, and run in the other direction. In all honesty, fair enough. Being faced with our own vulnerabilities and mortalities is challenging and scary. It’s not our fault either. Biologically, we are hardwired to react to immediate threats – the way our ancestors would have done in prehistoric times. While climate change is a very real and tangible threat, hot on our tails - and I would argue that yes, it is happening in front of our very eyes – this change is in many ways a ‘gradual’ one. It is gradual in the sense that when factors change in our environment, such as melting ice caps and the occurrence of extreme weather patterns, our psychological response is not the same as an immediate threat, such as a car, a wombat, a tree, or a Trump hurtling towards us suddenly out of

nowhere. Our bodies and brains are built to react to immediate threats, but we have never had to deal with a threat like climate change before. Philosophically, we are also not entirely at fault. It is the human condition to be fearful of change, of the future, of the unknown. This fear can manifest as anxiety, as depression, or alternatively as passivity, distraction and apathy (both feigned and genuine disregard). The biggest causers of environmental damage are typically those who are the wealthiest, have the most power, and have the most to lose if they act in support of climate change, and transition to more sustainable practices. Stay #woke everyone. Do your research and protect yourselves mentally, especially when it’s getting overwhelming. It is depressing stuff. No wonder so many of us choose not to think about it or distract ourselves. Or on the flip side, some of us worry or obsess about it, perhaps even lying awake in dread, disgust, fear or pain. Some of us are literally experiencing disturbance and dissonance from witnessing the effects of climate change, and are feeling completely helpless to reverse the climate crises emergency that we are facing. 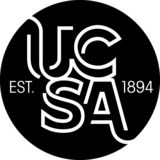