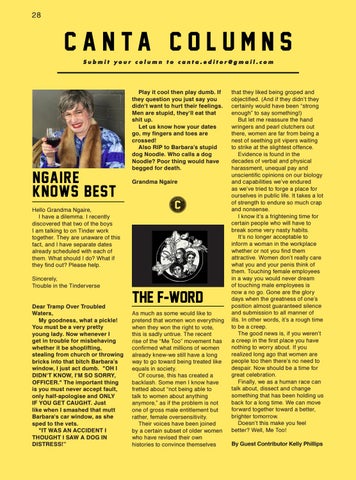 Play it cool then play dumb. If they question you just say you didn't want to hurt their feelings. Men are stupid, they'll eat that shit up. Let us know how your dates go, my fingers and toes are crossed! Also RIP to Barbara’s stupid dog Noodle. Who calls a dog Noodle? Poor thing would have begged for death. Grandma Ngaire

Hello Grandma Ngaire, I have a dilemma. I recently discovered that two of the boys I am talking to on Tinder work together. They are unaware of this fact, and I have separate dates already scheduled with each of them. What should I do? What if they find out? Please help. Sincerely, Trouble in the Tinderverse Dear Tramp Over Troubled Waters, My goodness, what a pickle! You must be a very pretty young lady. Now whenever I get in trouble for misbehaving whether it be shoplifting, stealing from church or throwing bricks into that bitch Barbara’s window, I just act dumb. "OH I DIDN'T KNOW, I'M SO SORRY, OFFICER." The important thing is you must never accept fault, only half-apologise and ONLY IF YOU GET CAUGHT. Just like when I smashed that mutt Barbara's car window, as she sped to the vets. "IT WAS AN ACCIDENT I THOUGHT I SAW A DOG IN DISTRESS!”

THE F-WORD As much as some would like to pretend that women won everything when they won the right to vote, this is sadly untrue. The recent rise of the “Me Too” movement has confirmed what millions of women already knew-we still have a long way to go toward being treated like equals in society. Of course, this has created a backlash. Some men I know have fretted about “not being able to talk to women about anything anymore,” as if the problem is not one of gross male entitlement but rather, female oversensitivity. Their voices have been joined by a certain subset of older women who have revised their own histories to convince themselves

that they liked being groped and objectified. (And if they didn’t they certainly would have been “strong enough” to say something!) But let me reassure the hand wringers and pearl clutchers out there, women are far from being a nest of seething pit vipers waiting to strike at the slightest offence. Evidence is found in the decades of verbal and physical harassment, unequal pay and unscientific opinions on our biology and capabilities we’ve endured as we’ve tried to forge a place for ourselves in public life. It takes a lot of strength to endure so much crap and nonsense. I know it’s a frightening time for certain people who will have to break some very nasty habits. It’s no longer acceptable to inform a woman in the workplace whether or not you find them attractive. Women don’t really care what you and your penis think of them. Touching female employees in a way you would never dream of touching male employees is now a no go. Gone are the glory days when the greatness of one’s position almost guaranteed silence and submission to all manner of ills. In other words, it’s a rough time to be a creep. The good news is, if you weren’t a creep in the first place you have nothing to worry about. If you realized long ago that women are people too then there’s no need to despair. Now should be a time for great celebration. Finally, we as a human race can talk about, dissect and change something that has been holding us back for a long time. We can move forward together toward a better, brighter tomorrow. Doesn’t this make you feel better? Well, Me Too! By Guest Contributor Kelly Phillips