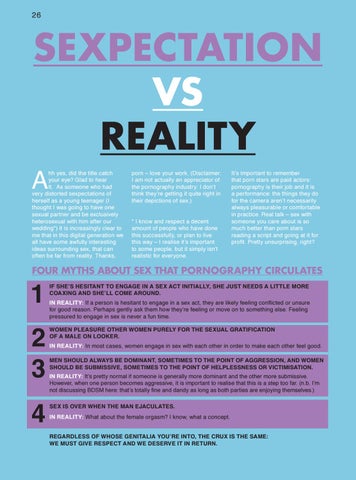 hh yes, did the title catch your eye? Glad to hear it. As someone who had very distorted sexpectations of herself as a young teenager (I thought I was going to have one sexual partner and be exclusively heterosexual with him after our wedding*) it is increasingly clear to me that in this digital generation we all have some awfully interesting ideas surrounding sex, that can often be far from reality. Thanks,

IF SHE’S HESITANT TO ENGAGE IN A SEX ACT INITIALLY, SHE JUST NEEDS A LITTLE MORE COAXING AND SHE’LL COME AROUND. IN REALITY: If a person is hesitant to engage in a sex act, they are likely feeling conflicted or unsure for good reason. Perhaps gently ask them how they’re feeling or move on to something else. Feeling pressured to engage in sex is never a fun time. WOMEN PLEASURE OTHER WOMEN PURELY FOR THE SEXUAL GRATIFICATION OF A MALE ON LOOKER. IN REALITY: In most cases, women engage in sex with each other in order to make each other feel good. MEN SHOULD ALWAYS BE DOMINANT, SOMETIMES TO THE POINT OF AGGRESSION, AND WOMEN SHOULD BE SUBMISSIVE, SOMETIMES TO THE POINT OF HELPLESSNESS OR VICTIMISATION. IN REALITY: It’s pretty normal if someone is generally more dominant and the other more submissive. However, when one person becomes aggressive, it is important to realise that this is a step too far. (n.b. I’m not discussing BDSM here: that’s totally fine and dandy as long as both parties are enjoying themselves.) SEX IS OVER WHEN THE MAN EJACULATES. IN REALITY: What about the female orgasm? I know, what a concept. REGARDLESS OF WHOSE GENITALIA YOU’RE INTO, THE CRUX IS THE SAME: WE MUST GIVE RESPECT AND WE DESERVE IT IN RETURN.