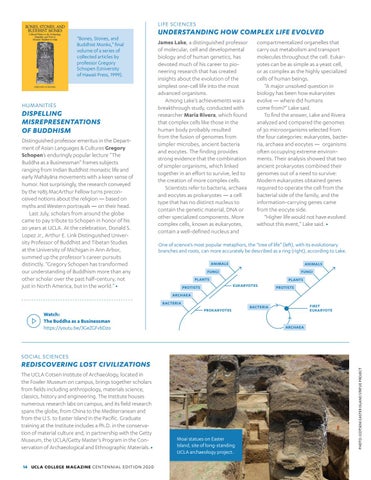 DISPELLING MISREPRESENTATIONS OF BUDDHISM Distinguished professor emeritus in the Department of Asian Languages &amp; Cultures Gregory Schopen’s enduringly popular lecture “The Buddha as a Businessman” frames subjects ranging from Indian Buddhist monastic life and early Mahāyāna movements with a keen sense of humor. Not surprisingly, the research conveyed by the 1985 MacArthur Fellow turns preconceived notions about the religion — based on myths and Western portrayals — on their head. Last July, scholars from around the globe came to pay tribute to Schopen in honor of his 20 years at UCLA. At the celebration, Donald S. Lopez Jr., Arthur E. Link Distinguished University Professor of Buddhist and Tibetan Studies at the University of Michigan in Ann Arbor, summed up the professor’s career pursuits distinctly. “Gregory Schopen has transformed our understanding of Buddhism more than any other scholar over the past half-century, not just in North America, but in the world.” •

UNDERSTANDING HOW COMPLEX LIFE EVOLVED James Lake, a distinguished professor of molecular, cell and developmental biology and of human genetics, has devoted much of his career to pioneering research that has created insights about the evolution of the simplest one-cell life into the most advanced organisms. Among Lake’s achievements was a breakthrough study, conducted with researcher Maria Rivera, which found that complex cells like those in the human body probably resulted from the fusion of genomes from simpler microbes, ancient bacteria and eocytes. The finding provides strong evidence that the combination of simpler organisms, which linked together in an effort to survive, led to the creation of more complex cells. Scientists refer to bacteria, archaea and eocytes as prokaryotes — a cell type that has no distinct nucleus to contain the genetic material, DNA or other specialized components. More complex cells, known as eukaryotes, contain a well-defined nucleus and

compartmentalized organelles that carry out metabolism and transport molecules throughout the cell. Eukaryotes can be as simple as a yeast cell, or as complex as the highly specialized cells of human beings. “A major unsolved question in biology has been how eukaryotes evolve — where did humans come from?” Lake said. To find the answer, Lake and Rivera analyzed and compared the genomes of 30 microorganisms selected from the four categories: eukaryotes, bacteria, archaea and eocytes — organisms often occupying extreme environments. Their analysis showed that two ancient prokaryotes combined their genomes out of a need to survive: Modern eukaryotes obtained genes required to operate the cell from the bacterial side of the family, and the information-carrying genes came from the eocyte side. “Higher life would not have evolved without this event,” Lake said. •

One of science’s most popular metaphors, the “tree of life” (left), with its evolutionary branches and roots, can more accurately be described as a ring (right), according to Lake. ANIMALS

Watch: The Buddha as a Businessman https://youtu.be/3GeZGFvbDzo

REDISCOVERING LOST CIVILIZATIONS The UCLA Cotsen Institute of Archaeology, located in the Fowler Museum on campus, brings together scholars from fields including anthropology, materials science, classics, history and engineering. The Institute houses numerous research labs on campus, and its field research spans the globe, from China to the Mediterranean and from the U.S. to Easter Island in the Pacific. Graduate training at the Institute includes a Ph.D. in the conservation of material culture and, in partnership with the Getty Museum, the UCLA/Getty Master’s Program in the Conservation of Archaeological and Ethnographic Materials. • 14 UCL A COLLEGE MAGAZINE CENTENNIAL EDITION 2020

The UCLA College has singled out 100 defining moments that capture its sweeping impact over the last 100 years and point the way to an exciting new century. 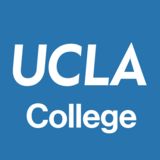