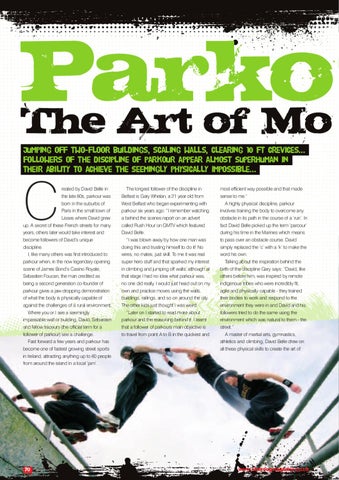 Parko u The Art of Mo v Jumping off two-floor buildings, scaling walls, clearing 10 ft crevices… followers of the discipline of parkour appear almost superhuman in their ability to achieve the seemingly physically impossible…

most efficient way possible and that made

reated by David Belle in

The longest follower of the discipline in

the late 80s, parkour was

Belfast is Gary Whelan, a 21 year old from

born in the suburbs of

West Belfast who began experimenting with

Paris in the small town of

involves training the body to overcome any

sense to me.” A highly physical discipline, parkour

a behind the scenes report on an advert

obstacle in its path in the course of a ‘run’. In

up. A secret of these French streets for many

years, others later would take interest and

during his time in the Marines which means

become followers of David’s unique discipline. I, like many others was first introduced to

“I was blown away by how one man was

to pass over an obstacle course. David

doing this and trusting himself to do it! No

simply replaced the ‘c’ with a ‘k’ to make the

wires, no mates, just skill. To me it was real

parkour when, in the now legendary opening

super hero stuff and that sparked my interest

Talking about the inspiration behind the

in climbing and jumping off walls, although at

Sebastien Foucan, the man credited as

that stage I had no idea what parkour was,

others before him, was inspired by remote

being a second generation co-founder of

no one did really. I would just head out on my

indigenous tribes who were incredibly fit,

own and practice moves using the walls,

agile and physically capable - they trained

of what the body is physically capable of

buildings, railings, and so on around the city.

their bodies to work and respond to the

against the challenges of a rural environment.

The other kids just thought I was weird.

environment they were in and David and his

Where you or I see a seemingly

“Later on I started to read more about

followers tried to do the same using the

parkour and the reasoning behind it. I learnt

environment which was natural to them - the

and fellow traceurs (the official term for a

that a follower of parkours main objective is

follower of parkour) see a challenge.

to travel from point A to B in the quickest and

A master of martial arts, gymnastics, athletics and climbing, David Belle drew on all these physical skills to create the art of

in Ireland, attracting anything up to 60 people from around the island in a local ‘jam’. 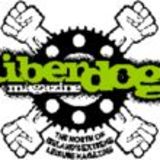 The north of Ireland's first and only extreme sports magazine

The north of Ireland's first and only extreme sports magazine