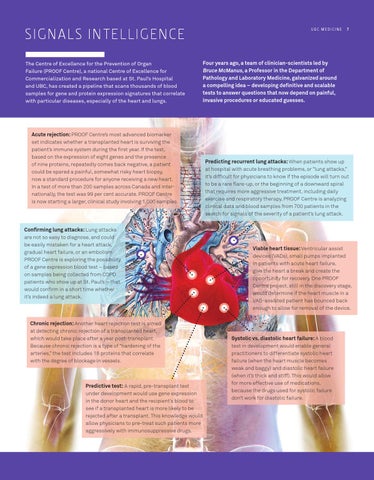 Signals Intelligence The Centre of Excellence for the Prevention of Organ Failure (PROOF Centre), a national Centre of Excellence for Commercialization and Research based at St. Paul’s Hospital and UBC, has created a pipeline that scans thousands of blood samples for gene and protein expression signatures that correlate with particular diseases, especially of the heart and lungs.

Four years ago, a team of clinician-scientists led by Bruce McManus, a Professor in the Department of Pathology and Laboratory Medicine, galvanized around a compelling idea – developing definitive and scalable tests to answer questions that now depend on painful, invasive procedures or educated guesses.

Acute rejection: PROOF Centre’s most advanced biomarker set indicates whether a transplanted heart is surviving the patient’s immune system during the first year. If the test, based on the expression of eight genes and the presence of nine proteins, repeatedly comes back negative, a patient could be spared a painful, somewhat risky heart biopsy, now a standard procedure for anyone receiving a new heart. In a test of more than 200 samples across Canada and internationally, the test was 99 per cent accurate. PROOF Centre is now starting a larger, clinical study involving 1,000 samples.

Confirming lung attacks: Lung attacks are not so easy to diagnose, and could be easily mistaken for a heart attack, gradual heart failure, or an embolism. PROOF Centre is exploring the possibility of a gene expression blood test – based on samples being collected from COPD patients who show up at St. Paul’s – that would confirm in a short time whether it’s indeed a lung attack.

Predictive test: A rapid, pre-transplant test under development would use gene expression in the donor heart and the recipient’s blood to see if a transplanted heart is more likely to be rejected after a transplant. This knowledge would allow physicians to pre-treat such patients more aggressively with immunosuppressive drugs.

Predicting recurrent lung attacks: When patients show up at hospital with acute breathing problems, or “lung attacks,” it’s difficult for physicians to know if the episode will turn out to be a rare flare-up, or the beginning of a downward spiral that requires more aggressive treatment, including daily exercise and respiratory therapy. PROOF Centre is analyzing clinical data and blood samples from 700 patients in the search for signals of the severity of a patient’s lung attack.

Viable heart tissue: Ventricular assist devices (VADs), small pumps implanted in patients with acute heart failure, give the heart a break and create the opportunity for recovery. One PROOF Centre project, still in the discovery stage, would determine if the heart muscle in a VAD-assisted patient has bounced back enough to allow for removal of the device. 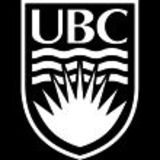 The official publication of the Faculty of Medicine of the University of British Columbia.

The official publication of the Faculty of Medicine of the University of British Columbia.