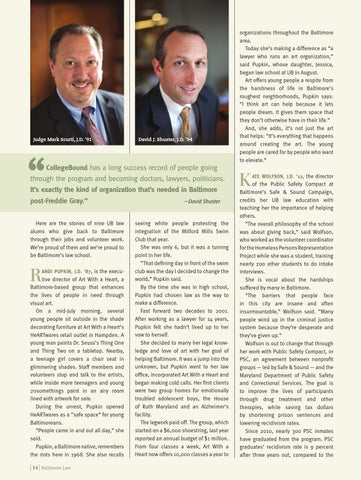 CollegeBound has a long success record of people going through the program and becoming doctors, lawyers, politicians. it’s exactly the kind of organization that’s needed in Baltimore post-Freddie gray.” —David Shuster Here are the stories of nine UB law alums who give back to Baltimore through their jobs and volunteer work. We’re proud of them and we’re proud to be Baltimore’s law school.

anDi PUPKin, J.D. ’87, is the executive director of Art With a Heart, a Baltimore-based group that enhances the lives of people in need through visual art. On a mid-July morning, several young people sit outside in the shade decorating furniture at Art With a Heart’s HeARTwares retail outlet in Hampden. A young man paints Dr. Seuss’s Thing One and Thing Two on a tabletop. Nearby, a teenage girl covers a chair seat in glimmering shades. Staff members and volunteers stop and talk to the artists, while inside more teenagers and young 20somethings paint in an airy room lined with artwork for sale. During the unrest, Pupkin opened HeARTwares as a “safe space” for young Baltimoreans. “People came in and out all day,” she said. Pupkin, a Baltimore native, remembers the riots here in 1968. She also recalls

seeing white people protesting the integration of the Milford Mills Swim Club that year. She was only 6, but it was a turning point in her life. “That defining day in front of the swim club was the day I decided to change the world,” Pupkin said. By the time she was in high school, Pupkin had chosen law as the way to make a difference. Fast forward two decades to 2001. After working as a lawyer for 14 years, Pupkin felt she hadn’t lived up to her vow to herself. She decided to marry her legal knowledge and love of art with her goal of helping Baltimore. It was a jump into the unknown, but Pupkin went to her law office, incorporated Art With a Heart and began making cold calls. Her first clients were two group homes for emotionally troubled adolescent boys, the House of Ruth Maryland and an Alzheimer’s facility. The legwork paid off. The group, which started on a $6,000 shoestring, last year reported an annual budget of $1 million. From four classes a week, Art With a Heart now offers 10,000 classes a year to

organizations throughout the Baltimore area. Today she’s making a difference as “a lawyer who runs an art organization,” said Pupkin, whose daughter, Jessica, began law school at UB in August. Art offers young people a respite from the harshness of life in Baltimore’s roughest neighborhoods, Pupkin says: “I think art can help because it lets people dream. It gives them space that they don’t otherwise have in their life.” And, she adds, it’s not just the art that helps: “It’s everything that happens around creating the art. The young people are cared for by people who want to elevate.”

aTe WolFson, J.D. ’12, the director of the Public Safety Compact at Baltimore’s Safe & Sound Campaign, credits her UB law education with teaching her the importance of helping others. “The overall philosophy of the school was about giving back,” said Wolfson, who worked as the volunteer coordinator for the Homeless Persons Representation Project while she was a student, training nearly 200 other students to do intake interviews. She is vocal about the hardships suffered by many in Baltimore. “The barriers that people face in this city are insane and often insurmountable,” Wolfson said. “Many people wind up in the criminal justice system because they’re desperate and they’ve given up.” Wolfson is out to change that through her work with Public Safety Compact, or PSC, an agreement between nonprofit groups — led by Safe & Sound — and the Maryland Department of Public Safety and Correctional Services. The goal is to improve the lives of participants through drug treatment and other therapies, while saving tax dollars by shortening prison sentences and lowering recidivism rates. Since 2010, nearly 300 PSC inmates have graduated from the program. PSC graduates’ recidivism rate is 9 percent after three years out, compared to the 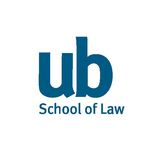 University of Baltimore School of Law

Welcome to the magazine of the University of Baltimore School of Law.

Welcome to the magazine of the University of Baltimore School of Law.