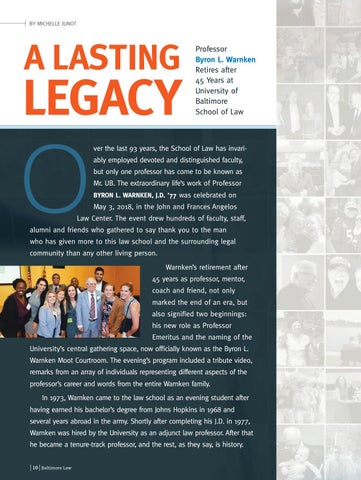 ver the last 93 years, the School of Law has invariably employed devoted and distinguished faculty, but only one professor has come to be known as Mr. UB. The extraordinary life’s work of Professor BYRON L. WARNKEN, J.D. ’77 was celebrated on

alumni and friends who gathered to say thank you to the man who has given more to this law school and the surrounding legal community than any other living person.

45 years as professor, mentor, coach and friend, not only marked the end of an era, but also signified two beginnings: his new role as Professor Emeritus and the naming of the University’s central gathering space, now officially known as the Byron L. Warnken Moot Courtroom. The evening’s program included a tribute video, remarks from an array of individuals representing different aspects of the professor’s career and words from the entire Warnken family.

In 1973, Warnken came to the law school as an evening student after

having earned his bachelor’s degree from Johns Hopkins in 1968 and several years abroad in the army. Shortly after completing his J.D. in 1977, Warnken was hired by the University as an adjunct law professor. After that he became a tenure-track professor, and the rest, as they say, is history. | 10 | Baltimore Law

The annual magazine of the University of Baltimore School of Law