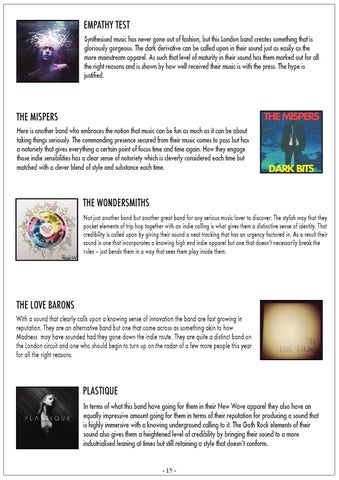 EMPATHY TEST Synthesised music has never gone out of fashion, but this London band creates something that is gloriously gorgeous. The dark derivative can be called upon in their sound just as easily as the more mainstream apparel. As such that level of maturity in their sound has them marked out for all the right reasons and is shown by how well received their music is with the press. The hype is justified.

THE MISPERS Here is another band who embraces the notion that music can be fun as much as it can be about taking things seriously. The commanding presence secured from their music comes to pass but has a notoriety that gives everything a certain point of focus time and time again. How they engage those indie sensibilities has a clear sense of notoriety which is cleverly considered each time but matched with a clever blend of style and substance each time.

THE WONDERSMITHS Not just another band but another great band for any serious music lover to discover. The stylish way that they pocket elements of trip hop together with an indie calling is what gives them a distinctive sense of identity. That credibility is called upon by giving their sound a neat tracking that has an urgency factored in. As a result their rules â&#x20AC;&#x201C; just bends them in a way that sees them play inside them.

THE LOVE BARONS With a sound that clearly calls upon a knowing sense of innovation the band are fast growing in reputation. They are an alternative band but one that come across as something akin to how Madness may have sounded had they gone down the indie route. They are quite a distinct band on the London circuit and one who should begin to turn up on the radar of a few more people this year for all the right reasons.

PLASTIQUE In terms of what this band have going for them in their New Wave apparel they also have an equally impressive amount going for them in terms of their reputation for producing a sound that is highly immersive with a knowing underground calling to it. The Goth Rock elements of their sound also gives them a heightened level of credibility by bringing their sound to a more 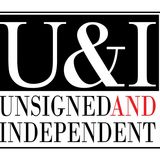