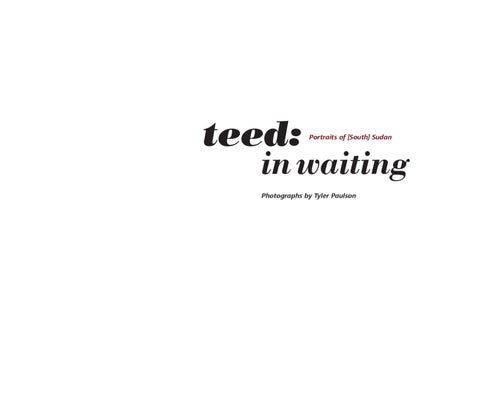 dedication To the people of South Sudan窶田ongratulations on the birth of your new nation. May she be a light that shines across Africa for the glory of God.

After achieving their independence from Great Britain

I traveled to the mid-western region of South Sudan

in 1956, the people of South Sudan spent thirty-nine

of the following fifty years in a war with the Sudanese

missionaries who operate a medical clinic and a training

government. In 2005, the two sides reached a peace

school for pastors. There I met a people in the midst

agreement, ending the war and giving South Sudan the

of transition and anticipation.

opportunity to vote for independence in 2011. Peace had allowed for new economic growth and new I was transfixed by the stories told of what the people

opportunities for education, and the town of Tonj where

were experiencing there. I believe in a God who is

redeeming humanity one life and one injustice at a timeâ&#x20AC;&#x201C;

between my two visits; but I quickly realized that the scars

and I believed he had a place for me in Africa.

of a generation that had known only war were very deep.

“Many things broke my heart, but I also saw so much beauty. Together they forever changed the way I saw the world.”

So many things broke my heart, but I also saw so much

I’ve experienced why justice and compassion are worth

beauty during my time in Africa. Together they forever

fighting for, and have discovered that art is a powerful

changed the way I saw the world. The slower pace

weapon. It can extract one moment from inside of a

of life instilled in me a much greater appreciation for the

simple joy of sharing life within a community of people.

and show it in one moment.

When I returned home, I took more time to sit, read, pray and listen–and realized that spending hours in front of a computer isn’t necessarily why I was created.

Often during initiation into adulthood, cuts are made on the skin and then filled, causing an infection that when healed, creates scars that protrude from the skin in a dramatic fashionâ&#x20AC;&#x201C;the Dinka equivalent of tattoos.

Morning at a primary school built out of an old arms storage center. One of my favorite experiences was filling in as the P-8 instructor for a few days and getting to know the students.

Villager in front of a field where men pasture their goats. What is not seen is a gun turret pointed toward the field. A leftover from the civil war and too heavy to be moved by the locals, it stands as one of many everyday reminders of the war.

This sequence of images is from an early evening trip to Tonjâ&#x20AC;&#x2122;s largest cattle camp. As the cattle come home for the evening, celebration, drumming and dance begin and the men compete in wrestling matches. Cattle, in addition to paper money, comprise the monetary system of Tonj. They are often used to pay for dowries and for long-term savings, making them a frequent catalyst for interpersonal conflict.

In late 2009, Donato was riding his bike home from town when he

Donato represents the future of South Sudan. Heâ&#x20AC;&#x2122;s a hard-working

was jumped and suffered a serious blow to the head. He was brought

student, mentored by those he helps around the ministry compound.

With strength and conviction, he keeps a smile on his face despite

evacuated to Kenya to receive further treatment. He spent Christmas

the adversity he has endured.

that year in Nairobi as a part of my friendsâ&#x20AC;&#x2122; family, receiving life-saving treatment, experiencing the big city, and learning about a life lived by faith.

Students learning on the walls of a former arms storehouse

Thunderstorms rolling in over a temporary shelter for cattle herders

“Feel the pain teaching us how much more we can take, reminding us how far we’ve come. Let the pain burn away from our hearts, we have time to start all over again. Oh if you would shine your love down here, I promise I’ll reflect it right back at you.” – Copeland Book from an exhibition of photographs I took while serving local missionaries who are apart of a great wave of transformation in South Suda...

Book from an exhibition of photographs I took while serving local missionaries who are apart of a great wave of transformation in South Suda...