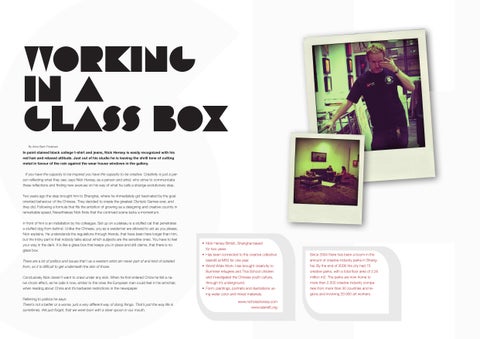 working in a glass box By Anne Bach Pedersen

In paint stained black college t-shirt and jeans, Nick Hersey is easily recognized with his red hair and relaxed attitude. Just out of his studio he is leaving the shrill tone of cutting metal in favour of the rain against the wear house windows in the gallery. If you have the capacity to be inspired you have the capacity to be creative. Creativity is just a person reflecting what they see, says Nick Hersey, as a person and artist, who strive to communicate these reflections and finding new avenues on his way of what he calls a strange evolutionary step. Two years ago the step brought him to Shanghai, where he immediately got fascinated by the goal oriented behaviour of the Chinese. They decided to create the greatest Olympic Games ever, and they did. Following a formula that fits the ambition of growing as a designing and creative country in remarkable speed. Nevertheless Nick finds that the contrived scene lacks a momentum. In front of him is an installation by his colleague. Set up on a plateau is a stuffed cat that penetrates a stuffed dog from behind. Unlike the Chinese, you as a westerner are allowed to act as you please, Nick explains. He understands the regulations through friends, that have been here longer than him, but the tricky part is that nobody talks about which subjects are the sensitive ones. You have to feel your way in the dark. It is like a glass box that keeps you in place and still claims, that there is no glass box.

• Nick Hersey British, Shanghai based for two years • Has been connected to the creative collective

There are a lot of politics and issues that I as a western artist am never part of and kind of isolated from, so it is difficult to get underneath the skin of those. Conclusively Nick doesn’t want to crawl under any skin. When he first entered China he felt a naive chock effect, as he calls it now, similar to the ones the European man could feel in his armchair, when reading about China and it’s barbarian restrictions in the newspaper.

Island6 at M50 for one year. • World Wide Work: Has brought creativity to

creative parks, with a total floor area of 2.25

and investigated the Chinese youth culture,

million m2. The parks are now home to

Referring to politics he says: There’s not a better or a worse, just a very different way of doing things. That’s just the way life is sometimes. We just forget, that we were born with a silver spoon in our mouth.

nies from more than 30 countries and regions and involving 20.000 art workers.

SHANGHAI - A CITY OF OPPORTUNITIES... FOR BUSINESS! By Camilla Gammel

By a fluke suddenly situated in Shanghai, French painter Julie A found herself experiencing the Shanghainese art scene from all quarters. If you succeed in Paris, it’s ‘wow’, if you succeed in New York it’s ‘wow, if you succeed in Shanghai it’s ‘okay’. That is how Julie A sees the global art scene after she packed oil and canvas and joined her boyfriend on his trip to the other side of the globe last year. Only the sad mumbling of a fan disturbs our conversation in Studio Zero at WeiHai Lu. The slender, dark haired girl explains how the level of the above mentioned art scene is lower than in Europe and US, which is why she doesn’t earn much international credit by having success here, …and that is also the reason, why I don’t want to stay here too long. Exploring the creative terrain of Shanghai has been some of a realization to Julie A. The atmosphere in Shanghai is so different. In Paris you cannot know every little place; there’s always something you don’t know, a little exhibition you didn’t see. Here you’ve seen it all before you’ve snapped your fingers. The creative environment in Shanghai is growing every day, but digging into it revealed mostly commercial related aspects to her. To a painter like Julie A herself, who paints with her fingers to find and connect with her roots it has been hard to enter this profit focused environment. More than once she has been asked what the fuck she is doing in China, if she doesn’t want to do business. It is always about selling, selling, selling; later it’s about what colours I use. Julie A states, though, that it is easy to be an artist in Shanghai compared to Europe. The city provides lots of possibilities; exhibitions everywhere, an easygoing networking culture, open VIP parties and a number of collectors interested in buying art from young up-comings.

sists of more than 30 artists from around the

• Receives unintelligible comments on her

globe, who have congregated in this cen-

paintings on a daily basis from three tea

drinking old Chinese men, who lives next to

Five years ago China’s leading director of commercial films swapped his lucrative lifestyle with the struggling, but also richer life of doing experimental art photography. With his hospitable soul, the characteristic goatee and not least his spectacular photos Maleonn is an easily spotted character on the Chinese art scene. Being a frontrunner of contemporary Chinese photography he has spend five years unceasingly fascinating his audience by taking the art of photography to the next level. Before, foreign people thought, that Chinese people are very poor and shy and have no passion. I show, that there are different faces of Chinese life. When I was young all Chinese people wore the same clothes; just two colours, blue or green. If you can’t dress in different colours, then how much heart is there? Today, things are different. Now Maleonn has a hard time seeing himself as a part of the creative environment of Shanghai, because creativity in a Chinese context today is to him equivalent to business. Maleonn states, that he actually sees a bigger need for courage than creativity among the Chinese artists of today. After the Cultural Revolution, where China’s cultural heritage got obliterated for the second time in history, Maleonn finds it important to look back at the history and seek to understand the past; search for the root instead of pacing down the future.

• Maleonn, born in Shanghai 1972 • Graduated from Fine Art College of Shanghai According to a 2003 report from the China

Creation of Art We need to save the important things in our life and not just be creative. That takes courage. Maleonn is born in Shanghai. He loves the city and it is a great inspiration to him. The city is constantly changing with a breath taking speed and even a native, as Maleonn can’t hold on to the pictures in his memory. To follow his own statement and avoid this feeling of history slipping away, photography is a way for him to confirm his life and save the important things.

Some projections predict that Shanghai’s population will rise to 23 million in less than 10 years, and constructions of several ‘satellite cities’ are underway to handle this increase.

Wing, a Chinese female artist, has found her own pace in a fast moving environment. The art scene of Shanghai is competitive, and the best way to beat it may be by not playing the game. Wing loves the countryside. Fresh air, good food and quietness are key ingredients for her well being as an artist. She is not hiding away from anything, though. Born in Hong Kong with projects and exhibitions in many parts of the world, she knows very well how to navigate in big cities. You have to go to the countryside to find a difference. There is no difference between Beijing, Shanghai and New York. When you stay in a big city everything is going so fast, it is ridiculous. Also the trends are moving fast. Whenever Wing gets too close to the so-called art scene and the expectations, talking to her artist friends about ‘what is going on’, she gets distracted. Her art form is not related to ‘what is going on’. She can follow the tendencies, but soon things will look different, a new trend and new way of working on art will appear. Look at Shanghai, even the buildings – 2 years and already old and ready to be torn down. And it is not just one buildings, it is the movement, the environment, the atmosphere. An artist needs a very steady form, when having focus on selling. This works for a period of time, but it stops when the audience changes. In Wings opinion, this is a very typical tragedy of what is going on with artists. She describes her way of working as very slow and personal.

China’s cultural and artistic centres. In 1999,

the city staged a total of 10,4000 performances attracting audiences of over 5 million.

the Arts, USA I am an artist, because I enjoy the process; and the strongest farmer is the one who cares about nurturing the crops.

Shanghai has gradually become one of

At the same time as Wing likes to keep her own pace, she is also very aware of her direction. She sometimes gets in trouble because of saying things very directly. I may walk slowly, but not in circles.