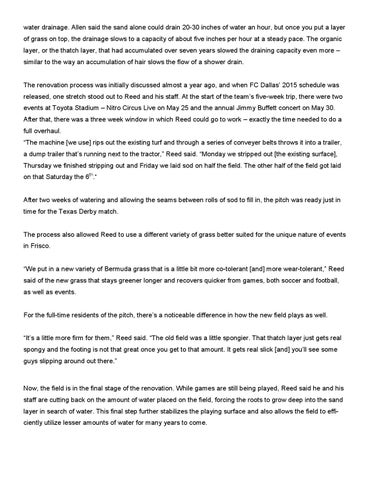 water drainage. Allen said the sand alone could drain 20-30 inches of water an hour, but once you put a layer of grass on top, the drainage slows to a capacity of about five inches per hour at a steady pace. The organic layer, or the thatch layer, that had accumulated over seven years slowed the draining capacity even more – similar to the way an accumulation of hair slows the flow of a shower drain. The renovation process was initially discussed almost a year ago, and when FC Dallas’ 2015 schedule was released, one stretch stood out to Reed and his staff. At the start of the team’s five-week trip, there were two events at Toyota Stadium – Nitro Circus Live on May 25 and the annual Jimmy Buffett concert on May 30. After that, there was a three week window in which Reed could go to work – exactly the time needed to do a full overhaul. “The machine [we use] rips out the existing turf and through a series of conveyer belts throws it into a trailer, a dump trailer that’s running next to the tractor,” Reed said. “Monday we stripped out [the existing surface], Thursday we finished stripping out and Friday we laid sod on half the field. The other half of the field got laid on that Saturday the 6th.“ After two weeks of watering and allowing the seams between rolls of sod to fill in, the pitch was ready just in time for the Texas Derby match. The process also allowed Reed to use a different variety of grass better suited for the unique nature of events in Frisco. “We put in a new variety of Bermuda grass that is a little bit more co-tolerant [and] more wear-tolerant,” Reed said of the new grass that stays greener longer and recovers quicker from games, both soccer and football, as well as events. For the full-time residents of the pitch, there’s a noticeable difference in how the new field plays as well. “It’s a little more firm for them,” Reed said. “The old field was a little spongier. That thatch layer just gets real spongy and the footing is not that great once you get to that amount. It gets real slick [and] you’ll see some guys slipping around out there.”

Now, the field is in the final stage of the renovation. While games are still being played, Reed said he and his staff are cutting back on the amount of water placed on the field, forcing the roots to grow deep into the sand layer in search of water. This final step further stabilizes the playing surface and also allows the field to efficiently utilize lesser amounts of water for many years to come.