From a grey industrial zone to an outstanding sustainable community 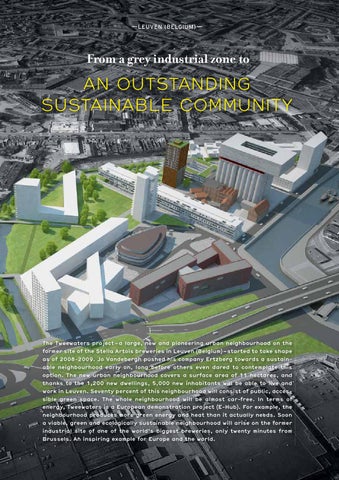 From a grey industrial zone to

The Tweewaters project – a large, new and pioneering urban neighbourhood on the former site of the Stella Artois breweries in Leuven (Belgium) – started to take shape as of 2008-2009. Jo Vandebergh pushed his company Ertzberg towards a sustainable neighbourhood early on, long before others even dared to contemplate this option. The new urban neighbourhood covers a surface area of 11 hectares, and thanks to the 1,200 new dwellings, 5,000 new inhabitants will be able to live and work in Leuven. Seventy percent of this neighbourhood will consist of public, accessible green space. The whole neighbourhood will be almost car-free. In terms of energy, Tweewaters is a European demonstration project (E-Hub). For example, the neighbourhood produces more green energy and heat than it actually needs. Soon a viable, green and ecologically sustainable neighbourhood will arise on the former industrial site of one of the world’s biggest breweries, only twenty minutes from Brussels. An inspiring example for Europe and the world.

The formerly lifeless and depressing neighbourhood has already largely paved the way for Tweewaters. The “Balk van Beel” (Beel’s beam) – Stéphane Beel is Flanders’ leading architect with an international reputation – has already been built. An innovative car park for 250 cars was recently built. The plans for a visually striking apartment building – the Twist – are being designed onsite. And Q – a residential complex with assisted living facilities – has been designed and is ready to be built on the banks of the River Dyle. The rather desolate urban section of the brewery is being transformed into futuristic buildings, founded on a vision. Tweewaters is all about “living in the future” in today’s biggest contemporary city centre project in Belgium. And Europe perhaps? Jo Vandebergh formu-

between the supplier and customer, the

metres and will redesign the neighbour-

delivery is always made, even when

hood’s skyline. Just under the super-

“urban convenience” or “time and a care-

free existence to everyone and being

The ambitious project is an eye-catcher

there will be an exceptional public square,

able to guarantee this to the following

in many ways, but the sustainability

the city balcony, with a spectacular view

generations” – which underpins this inte-

aspect is probably the most striking.

grated project. With Tweewaters, the

that sustainability and comfort go hand

and consumption and services. All the

aspects that are so closely connected in

The ﬁrst building to be built in Twee-

our society are tackled in this urban

waters was the “Balk van Beel”. The

neighbourhood. The approach is holistic.

ambitions for this building were quite

All the aspects have an environmental

high. The combination of high-level, con-

The urban development ﬁrm offers a

impact, which is why they all inﬂuence

“new way of life” to the inhabitants and

the reduction of the neighbourhood’s

fort of living, and exceptionally solid

people who experienced and believed in

sustainability principles, initially did not

the new neighbourhood, with certain liv-

a reduction of the energy demand, max-

even appeal to the ﬁnanciers. That is

ing patterns that are strikingly “differ-

ent” from what we accustomed to: smart

with its own resources, without compro-

be a CO2-negative neighbourhood. Where

the “Balk van Beel” was built, in com-

cables and home delivery lockers. The

pliance with the highest standards in

latter especially are inventive and inno-

vative. People living in Tweewaters can

have goods delivered to their home or picked up from their home, even when

nobody is home. This promotes sustain-

vation, etc. It earned the “outstanding” Breeam certiﬁcation, and is considered

ability and comfort because, whereas all

Tweewaters ties in closely with the exist-

to be the most sustainable building in

the inhabitants drive to the shops indi-

ing urban fabric, but at the same time,

its category on the continent. Which is

it marks a break with the traditional

why Ertzberg was invited to London to

transportation is much more efﬁcient in

streets and squares of the city centre.

Tweewaters thanks to these lockers and

the smart logistics associated with it.

but in a different urban development

the Sustainable Partnerships Award this

One delivery for the entire neighbour-

year for its innovative and socially com-

hood and, thanks to the smart link

waters is a world-class project. There is

mitted collaboration with the organisa-

no other, similar project that is founded

tions in the neighbourhood.

on the same holistic approach.

After the “Balk van Beel”, the next

buildings to be built are the Twist and Q.

also has several gems that will put Leuven

The silos and the rest of the neighbour-

on the world map. The silos of the former

Stella Artois site are certain to be a

and the entire neighbourhood will comply

with the highest sustainability require-

and front part of the 54 cylinders will be

ments. Or how Tweewaters is going in

removed to make them look even more

search of recognition as the ﬁrst “out-

remarkable. The round façade openings

will allow for the necessary daylight. A new superstructure will protrude by 18

From a grey industrial zone to an outstanding sustainable community