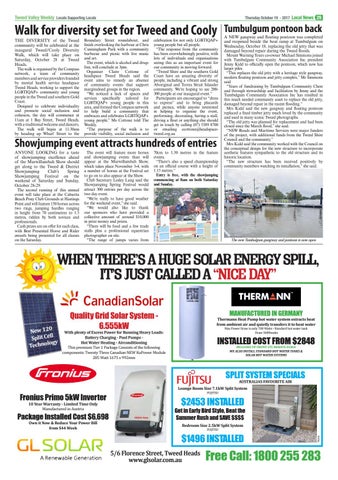 Walk for diversity set for Tweed and Cooly

THE DIVERSITY of the Tweed community will be celebrated at the inaugural Tweed/Cooly Diversity Walk, which will take place on Saturday, October 28 at Tweed Heads. The walk is organised by the Compass network, a team of community members and service providers founded by mental health service headspace Tweed Heads, working to support the LGBTIQAP+ community and young people in the Tweed and southern Gold Coast. Designed to celebrate individuality and promote social inclusion and cohesion, the day will commence at 11am at 1 Bay Street, Tweed Heads, with a traditional welcome and dancers. The walk will begin at 11.30am by heading up Wharf Street to the

Boundary Street roundabout, and finish overlooking the harbour at Chris Cunningham Park with a community barbecue and picnic with live music and art. The event, which is alcohol and drugfree, will conclude at 3pm. Organiser Claire Cottone of headspace Tweed Heads said the event aims to remedy an absence of community events that support marginalised groups in the region. “We noticed a lack of spaces and services specifically tailored for LGBTIQAP+ young people in this area, and formed the Compass network to help build a community that embraces and celebrates LGBTIQAP+ young people,” Ms Cottone told The Weekly. “The purpose of the walk is to provide visibility, social inclusion and

celebration for not only LGBTIQAP+ young people but all people. “The response from the community has been overwhelmingly positive, with lots of individuals and organisations seeing this as an important event for our community in moving forward. “Tweed Shire and the southern Gold Coast have an amazing diversity of people, including a vibrant and strong Aboriginal and Torres Strait Islander community. We’re hoping to see 200300 people at our inaugural event.” Participants are encouraged to “dress to express” and to bring placards and picnics, while anyone interested in helping to organise the event, performing, decorating, having a stall, driving a float or anything else should get in touch by calling (07) 5589 8700 or emailing ccottone@headspacetweed.org.au

ANYONE LOOKING for a taste of showjumping excellence ahead of the Murwillumbah Show should get along to the Tweed & District Showjumping Club’s Spring Showjumping Festival on the weekend of Saturday and Sunday, October 28-29. The second running of this annual event will take place at the Cabarita Beach Pony Club Grounds at Hastings Point and will feature 150 horses across two rings, jumping hurdles ranging in height from 70 centimetres to 1.3 metres, ridden by both novices and professionals. Cash prizes are on offer for each class, with Best Presented Horse and Rider awards being presented for all classes on the Saturday.

The event will feature more horses and showjumping events than will appear at the Murwillumbah Show, which takes place November 3-4, with a number of horses at the Festival set to go on to also appear at the Show. Club Secretary Lesley Lang said the Showjumping Spring Festival would attract 300 entries per day across the two day event. “We’re really to have good weather for the weekend event,” she said. “We would also like to thank our sponsors who have provided a collective amount of around $10,000 in prize money and prizes. “There will be food and a few trade stalls plus a professional equestrian photographer on site. “The range of jumps varies from

70cm to 1.30 metres in the feature events. “There’s also a speed championship on an official course with a height of 1.15 metres.” Entry is free, with the showjumping commencing at 8am on both Saturday and Sunday.

A NEW gangway and floating pontoon was completed and reopened beside the boat ramp at Tumbulgum on Wednesday, October 18, replacing the old jetty that was damaged beyond repair during the Tweed floods. Mount Warning Tours co-owner Michael Simmons joined with Tumbulgum Community Association Inc president Jenny Kidd to officially open the pontoon, which now has larger piles. “This replaces the old jetty with a heritage style gangway, modern floating pontoon and jetty complex,” Mr Simmons said “Years of fundraising by Tumbulgum Community Chest and through stewardship and facilitation by Jenny and the Tumbulgum Community Association Inc has resulted in this much needed community asset to replace the old jetty, damaged beyond repair in the recent flooding.” Mrs Kidd said the new gangway and floating pontoon replaced a fixed timber jetty much loved by the community and used in many iconic Tweed photographs. “The old jetty was planned for replacement and had been closed since the March flood,” she said. “NSW Roads and Maritime Services were major funders of the project, with additional funds from the Tweed Shire Council and the community.” Mrs Kidd said the community worked with the Council on the conceptual design for the new structure to incorporate aesthetic features sympathetic to the old structure and its historic location. “The new structure has been received positively by community members watching its installation,” she said.

The new Tumbulgum gangway and pontoon is now open 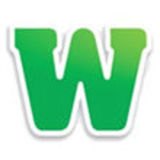