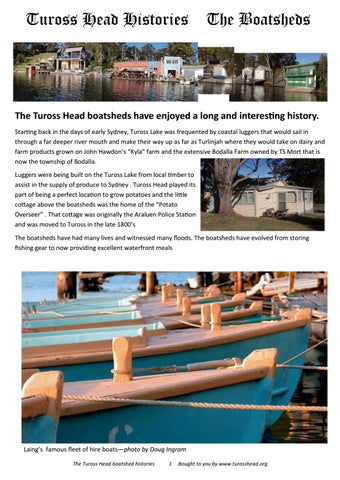 The Tuross Head boatsheds have enjoyed a long and interes ng history. Star ng back in the days of early Sydney, Tuross Lake was frequented by coastal luggers that would sail in through a far deeper river mouth and make their way up as far as Turlinjah where they would take on dairy and farm products grown on John Hawdon’s “Kyla” farm and the extensive Bodalla Farm owned by TS Mort that is now the township of Bodalla. Luggers were being built on the Tuross Lake from local mber to assist in the supply of produce to Sydney . Tuross Head played its part of being a perfect loca on to grow potatoes and the li*le co*age above the boatsheds was the home of the “Potato Overseer” . That co*age was originally the Araluen Police Sta on and was moved to Tuross in the late 1800’s The boatsheds have had many lives and witnessed many ﬂoods. The boatsheds have evolved from storing ﬁshing gear to now providing excellent waterfront meals 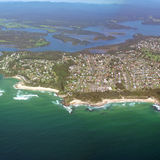