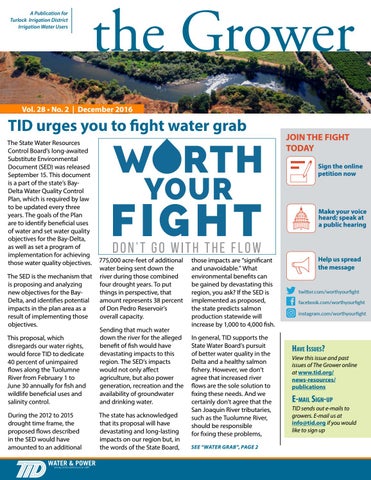 TID urges you to fight water grab The State Water Resources Control Board’s long-awaited Substitute Environmental Document (SED) was released September 15. This document is a part of the state’s BayDelta Water Quality Control Plan, which is required by law to be updated every three years. The goals of the Plan are to identify beneficial uses of water and set water quality objectives for the Bay-Delta, as well as set a program of implementation for achieving those water quality objectives. The SED is the mechanism that is proposing and analyzing new objectives for the BayDelta, and identifies potential impacts in the plan area as a result of implementing those objectives.

Make your voice heard; speak at a public hearing

775,000 acre-feet of additional water being sent down the river during those combined four drought years. To put things in perspective, that amount represents 38 percent of Don Pedro Reservoir’s overall capacity.

This proposal, which disregards our water rights, would force TID to dedicate 40 percent of unimpaired flows along the Tuolumne River from February 1 to June 30 annually for fish and wildlife beneficial uses and salinity control.

Sending that much water down the river for the alleged benefit of fish would have devastating impacts to this region. The SED’s impacts would not only affect agriculture, but also power generation, recreation and the availability of groundwater and drinking water.

During the 2012 to 2015 drought time frame, the proposed flows described in the SED would have amounted to an additional

The state has acknowledged that its proposal will have devastating and long-lasting impacts on our region but, in the words of the State Board,

those impacts are “significant and unavoidable.” What environmental benefits can be gained by devastating this region, you ask? If the SED is implemented as proposed, the state predicts salmon production statewide will increase by 1,000 to 4,000 fish. In general, TID supports the State Water Board’s pursuit of better water quality in the Delta and a healthy salmon fishery. However, we don’t agree that increased river flows are the sole solution to fixing these needs. And we certainly don’t agree that the San Joaquin River tributaries, such as the Tuolumne River, should be responsible for fixing these problems, SEE “WATER GRAB”, PAGE 2

Help us spread the message

Have Issues? View this issue and past issues of The Grower online at www.tid.org/ news-resources/ publications

WATER GRAB: Speak now, or yield to envious state regulators especially considering TID’s growers do not benefit from water managed by state and federal agencies in the Delta.

If the state is really interested in increasing the fish population on the Tuolumne River, wouldn’t it be prudent to address some of the known issues affecting the River? We sure believe so, and together with MID, we’ve invested more than $25 million in developing the best available science on the Tuolumne River. This science has allowed us to suggest non-flow solutions that could be implemented now to benefit the River. Here’s a few:

Implement a predation suppression program on the Tuolumne. More than 90 percent of outmigrating juvenile salmon are consumed by predatory fish before they reach the San Joaquin River. Reducing the population of non-native predators by just 10 percent can achieve the same increases in salmon productivity as the State Water Board’s proposal. Implement river and habitat improvements on the Tuolumne, such as gravel improvements, water hyacinth removal efforts and riparian vegetation expansion. Restructure existing river operations. Improvements to salmon and rainbow trout populations can be significantly improved by modifying the timing and duration of existing river flow requirements.

TID and MID are created and continue to administer the

Worth Your Fight campaign to push back against this vicious water grab aimed at your way of life and our humble communities, but we can’t do it alone. We need your help and for you to make your voice known to the State Water Board. Please visit worthyourfight.org to get more information and join the thousands who have already signed the e-petition. Attend one of the pubic hearings (see above) and speak out against this flawed plan. Ag interests, urban water users, large and small businesses, local agencies and everyday citizens must band together and speak with one clear voice to stop this devastating state overreach. Don’t you think it’s Worth Your Fight?

Lateral 8 Regulating Reservoir performs as expected During the 2015-16 winter season, the District completed construction of the first reservoir built by TID since the completion of Don Pedro in 1971. Although only a fraction of the size of Don Pedro, the Lateral 8 Regulating Reservoir proved effective in capturing and storing water that would otherwise be lost to operational fluctuations in the system. In fact, the facility captured more than 90 percent of the spills on the Highline Canal and vastly improved service to irrigators on the often challengingto-operate lower end of the system. The amount of water captured and used from the project was 4,812 acre-feet, which will vary from year to year. Of water that entered the reservoir, less than one percent was lost to evaporation and infiltration. The remaining water was used to prevent shortages on Laterals 7 and 8 and provide operational benefits upstream to the Turlock Main and Cross Ditches. Groundwater levels around the pond were monitored monthly, and no adverse effects were observed or reported.

2016 Irrigation Season By the Numbers

Don Pedro at the conclusion of the irrigation season

Don Pedro at the conclusion of the 2015 irrigation season

Tuolumne River as an annual average, based upon 50 years of the state’s data .

Reminder: 2017 Billing You will soon receive a letter regarding billing changes where appropriate for the 2017 irrigation season. This change is in response to The Water Conservation Act of 2009. Some flows will remain unchanged while others may increase or decrease. The following information will be included in this letter: • Your billed flow per parcel & sidegate in 2016 • The volume of water billed in 2016 • The dollar amount billed per parcel in 2016 • Your new flow per parcel & sidegate beginning in 2017 • The dollar amount you would have paid in 2016 if your actual measured flows were used Want to know more about how TID calculated the new flows? Visit tid.org/2016flows

A few rule reminders to ensure efficient operations From time to time, it is important for the District to remind growers and others working near District canals and facilities regarding a few selected rules set forth in TID’s Irrigation Rules. TID’s Irrigation Rules exist pursuant to Water Code Section 22257 to ensure the orderly, efficient, and equitable distribution, use and conservation of water resources of the District. While it may seem that some of these rules are more serious than others, they are designed to allow TID to continue to meet the needs of all growers that rely on irrigation water. Irrigation Rule 2.4.1 states: “No diverting gates, weirs, structures, or pump intakes shall be constructed or placed in any District conduit until an application in writing has been

made to the TID Board of Directors and permission granted therefore.” Growers are not allowed to place structures in TID canals, facilities, easements or rights-of-way without written permission. TID endeavors to deliver irrigation water in a flexible, timely manner consistent with the physical and operational limits of delivery facilities. In order to do this, TID needs to be able to conduct water distribution operations and maintenance while free of obstructions. A full copy of TID’s Irrigation Rules is available online at tid.org/water/irrigation. Water Distribution Operators also have copies available for growers. TID thanks you for your continued compliance.

SB 854 and You California Senate Bill SB 854 took effect on June 30, 2014 and fundamentally changed the way Public Works projects are administered in California. This change affects TID as any project undertaken by the District or,by ALL Improvement Districts, including, pipeline, ditch, pump, drains, sub-surface drains and pressurized micro systems seeking reimbursement from District administered assessment funds for improvements or repairs made, are considered a Public Works Project and must abide by its requirements. If you’re considering hiring a contractor to perform work and then utilizing District assessment funds for reimbursement, then you are subject to the provisions of the law. More info online at www.tid.org/sb854

Growers planning to convert to drip/micro/sprinkler irrigation (i.e. land conversion), need to contact TID prior to performing any work so TID can verify a non-standard head can be delivered. Systems installed without prior approval may be denied water if the configuration is not compatible with the District’s infrastructure and operations. Please keep in mind that this type of conversion can negatively impact groundwater recharge in your area.

Growers intending to use TID canals and laterals or Improvement District facilities for irrigation purposes during the off-season must contact the Water Distribution Department (883-8356) to coordinate the use.

Growers shall not plant or place trees, vines, shrubs, fences, or any other type of encroachment in, on, or over any District or improvement district conduit or any District right-of-way unless the District has given specific written approval for such encroachment (Irrigation Rule 2.3.1). Please contact TID prior to placing encroachments in the District’s rights-ofway. If in doubt, TID can also help to identify and mark the right-of-way, often at no cost to the grower. TID's newsletter for irrigators, The Grower

TID's newsletter for irrigators, The Grower