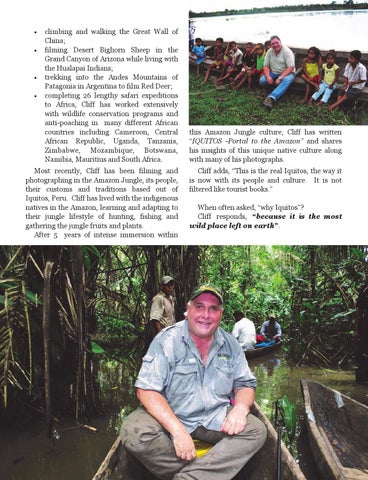 climbing and walking the Great Wall of China; filming Desert Bighorn Sheep in the Grand Canyon of Arizona while living with the Hualapai Indians; trekking into the Andes Mountains of Patagonia in Argentina to film Red Deer; completing 26 lengthy safari expeditions to Africa, Cliff has worked extensively with wildlife conservation programs and anti-poaching in many different African countries including Cameroon, Central African Republic, Uganda, Tanzania, Zimbabwe, Mozambique, Botswana, Namibia, Mauritius and South Africa.

Most recently, Cliff has been filming and photographing in the Amazon Jungle, its people, their customs and traditions based out of Iquitos, Peru. Cliff has lived with the indigenous natives in the Amazon, learning and adapting to their jungle lifestyle of hunting, fishing and gathering the jungle fruits and plants. After 5 years of intense immersion within

this Amazon Jungle culture, Cliff has written “IQUITOS -Portal to the Amazon” and shares his insights of this unique native culture along with many of his photographs. Cliff adds, “This is the real Iquitos, the way it is now with its people and culture. It is not filtered like tourist books.” When often asked, “why Iquitos”? Cliff responds, “because it is the most wild place left on earth”. 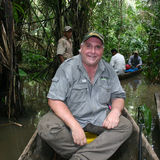