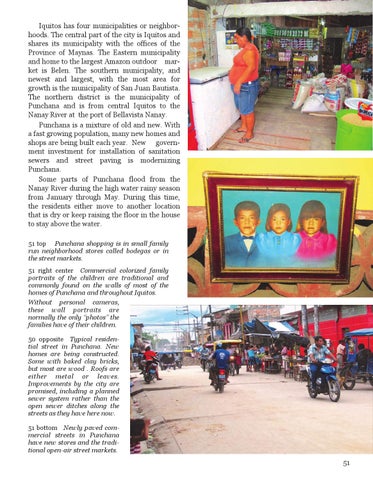 Iquitos has four municipalities or neighborhoods. The central part of the city is Iquitos and shares its municipality with the offices of the Province of Maynas. The Eastern municipality and home to the largest Amazon outdoor market is Belen. The southern municipality, and newest and largest, with the most area for growth is the municipality of San Juan Bautista. The northern district is the municipality of Punchana and is from central Iquitos to the Nanay River at the port of Bellavista Nanay. Punchana is a mixture of old and new. With a fast growing population, many new homes and shops are being built each year. New government investment for installation of sanitation sewers and street paving is modernizing Punchana. Some parts of Punchana flood from the Nanay River during the high water rainy season from January through May. During this time, the residents either move to another location that is dry or keep raising the floor in the house to stay above the water. 51 top Punchana shopping is in small family run neighborhood stores called bodegas or in the street markets. 51 right center Commercial colorized family portraits of the children are traditional and commonly found on the walls of most of the homes of Punchana and throughout Iquitos. Without personal cameras, these wall portraits are normally the only â&#x20AC;&#x153;photosâ&#x20AC;? the families have of their children. 50 opposite Typical residential street in Punchana. New homes are being constructed. Some with baked clay bricks, but most are wood . Roofs are either metal or leaves. Improvements by the city are promised, including a planned sewer system rather than the open sewer ditches along the streets as they have here now. 51 bottom Newly paved commercial streets in Punchana have new stores and the traditional open-air street markets.

Iquitos, Peru. Isolated, deep in the Amazon Jungle without any roads connecting to the outside world. One of the last great wild frontier t...

Iquitos, Peru. Isolated, deep in the Amazon Jungle without any roads connecting to the outside world. One of the last great wild frontier t...