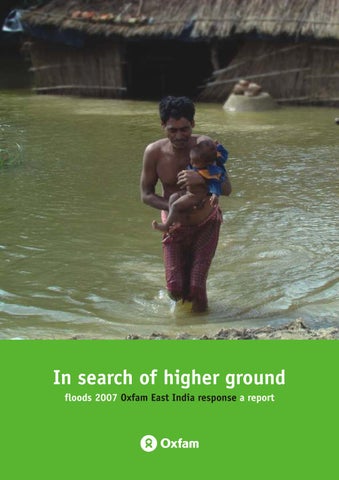 Eastern India Flood Situation Eastern India has some of the most poverty stricken regions in the country that are vulnerable to natural disasters like floods, cyclones and earthquakes. These impact the lives and livelihood of almost 90% of the population. The Eastern Indian states comprise of marginalised communities, scheduled castes and tribes who are deprived of basic amenities for survival. These agricultural economies get devastated because of natural disasters. Due to lack of employment opportunities the migration rate is very high. Poor Governance is also an issue in majority of the states in this part of country leading to poor implementation of government schemes and unplanned measures to tackle the poverty and suffering of the population.

One of the most occurring disasters is floods that occur between June and September every year. The nature of these floods can be recurrent flash flooding, early flooding and prolonged slow onset flooding. 2007 Floods were one of the most severe in this decade in all the eastern India states - West Bengal, Orissa, Bihar and Assam. The complexity of the situation was compounded by multiple flooding, remoteness of the areas and difficult communication.

Oxfam Response Background Over the last 57 years in India Oxfam GB has responded to all major incidences of emergencies in the country and to floods in East India. In the past decade, Oxfam East India Office has responded to almost all the major catastrophes in the operational states of West Bengal, Orissa, Bihar and Assam. In recent years, Oxfam has responded to Orissa's Super Cyclone of 1999, floods of 2001, 2003, 2004 and 2006, with immediate relief to the affected people. Oxfam has provided support to critically affected families with relief, recovery/rehabilitation, and has built capacities for future preparedness.

â&#x20AC;&#x153;It sounded like a bomb exploding. I could hear the embankment breaking 3 kms away. The water began seeping through in small portions. It finally gave way and there was a huge flood. As soon as I saw the water coming through the embankment, I ran home to get my family and take them to safety. We all made it just in time. But we lost all our food, my bicycle, utensils. The flood not only took all my possessions, but also my entire house. Our fields are gone.â&#x20AC;? Rameshwar Rai Narwar village, Jhanjharpur Block Madhubani

20 temporary bathrooms and 4 permanent latrines were constructed to ensure safe defecation and sanitation during floods for the most vulnerable families living in camps / embankments. n 1093 hand pumps were disinfected,

raised and repaired with platforms to ensure safe water throughout the year and during floods. n 21 Communal bathrooms with hand

pumps and bathing facilities for women were constructed in Bihar to ensure privacy and safety for women. n Village cleanliness and hygiene promo-

Provision of Winter Crops This was to help vulnerable families recover from loss of primary agriculture (crops such as paddy), prevent migration to fund food and income needs and ensure minimum food in the next season.

paredness and reducing flood related risks at the village level.

5300 beneficiaries (30% women) worked on construction and repair of village assets, with more than 80% intended impact towards risk reduction at the village and household level. Structures that were created include raised platforms, mounds, link roads, repair embankments, irrigation channels, ponds excavation and raised homesteads.

This strategy had a two pronged approach: Firstly addressing the short term food and income needs of targeted vulnerable families. Secondly the construction under CFW was aimed at disaster risk reduction by strengthening pre-

“We were in a deep sleep when the floods started. It began with a very severe wind blowing. My father-in-law woke all of us up and told us we had to get to higher ground to escape.

health. They provided us with bore wells for drinking water and temporary toilets.At the moment I am doing all the household work as we continue to get back our life. I also look after my two children.”

It was when we were moving out that my labour pains began. My father-in-law built a makeshift boat from a banana tree and used it to help me get out of the floods. When we got to higher ground I gave birth to my child.

It was seven days after that relief teams from other countries came to help us. We were given encouragement and made to feel strong to be able to fight with our worsening conditions. By eating the food that the NGO's provided for us we are able to gain back our health. The NGO's gave us cash for work programmes, which helped us get money and which we are using to help improve our situation. They also taught us about hygiene and how to maintain good

“The floods were extremely severe. If our house had not been raised, it would have been literally under the water. We would have lost everything.” Shanti Devi (dalit woman) Bihar Shanti Devi’s raised house saved her family from having to relocate.

n Oxfam has played a key role in Co-

meetings, Key Government officials from Rural Water and Supply Department or Public health and Engineering department acknowledged the need for raised hand pumps of similar design in villages. The department has planned to construct new hand pumps following the model.

ordination meetings within international agencies and with government in all the three project states. Regular meetings have happened as preparedness to 2008 floods.

Agency Secretariat (coordination body for all international agencies) to strengthen Inter Agency Group (IAG) coordination with Government. IndoGlobal Social Service Society (IGSSS), Assam, will function as secretariat and Oxfam has signed an MOU with it. n Oxfam and its partners have taken the

lead in organising District level coordination meetings in all the project districts.

wages under NREGA : Villagers in the project areas bargained for their entitled wage (Rs.80/-) under NREGA. Earlier they were paid less by government however as a result of Oxfam and partnersâ&#x20AC;&#x2122; cash for work payments and awareness on NREGA guidelines, they were able to get their correct dues.

in school curriculum n Ensuring entitlements for people from

Families for all sectors

Only means to commute to marooned villages, Darbhanga, Bihar 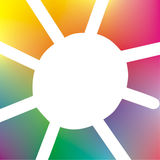 In Search of Higher Ground

Report on the relief and recovery work by Oxfam India partners in the wake of floods in eastern India 2007.

In Search of Higher Ground

Report on the relief and recovery work by Oxfam India partners in the wake of floods in eastern India 2007.