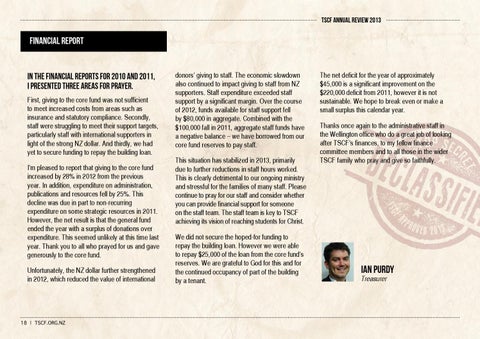 In the financial reports for 2010 and 2011, I presented three areas for prayer. First, giving to the core fund was not sufficient to meet increased costs from areas such as insurance and statutory compliance. Secondly, staff were struggling to meet their support targets, particularly staff with international supporters in light of the strong NZ dollar. And thirdly, we had yet to secure funding to repay the building loan. I’m pleased to report that giving to the core fund increased by 28% in 2012 from the previous year. In addition, expenditure on administration, publications and resources fell by 25%. This decline was due in part to non-recurring expenditure on some strategic resources in 2011. However, the net result is that the general fund ended the year with a surplus of donations over expenditure. This seemed unlikely at this time last year. Thank you to all who prayed for us and gave generously to the core fund. Unfortunately, the NZ dollar further strengthened in 2012, which reduced the value of international

donors’ giving to staff. The economic slowdown also continued to impact giving to staff from NZ supporters. Staff expenditure exceeded staff support by a significant margin. Over the course of 2012, funds available for staff support fell by $80,000 in aggregate. Combined with the $100,000 fall in 2011, aggregate staff funds have a negative balance – we have borrowed from our core fund reserves to pay staff. This situation has stabilized in 2013, primarily due to further reductions in staff hours worked. This is clearly detrimental to our ongoing ministry and stressful for the families of many staff. Please continue to pray for our staff and consider whether you can provide financial support for someone on the staff team. The staff team is key to TSCF achieving its vision of reaching students for Christ. We did not secure the hoped-for funding to repay the building loan. However we were able to repay $25,000 of the loan from the core fund’s reserves. We are grateful to God for this and for the continued occupancy of part of the building by a tenant.

The net deficit for the year of approximately $45,000 is a significant improvement on the $220,000 deficit from 2011, however it is not sustainable. We hope to break even or make a small surplus this calendar year. Thanks once again to the administrative staff in the Wellington office who do a great job of looking after TSCF’s finances, to my fellow finance committee members and to all those in the wider TSCF family who pray and give so faithfully. 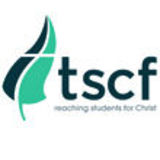 Looking back on the year's stories and partnerships, and looking at the changes ahead for TSCF.

Looking back on the year's stories and partnerships, and looking at the changes ahead for TSCF.