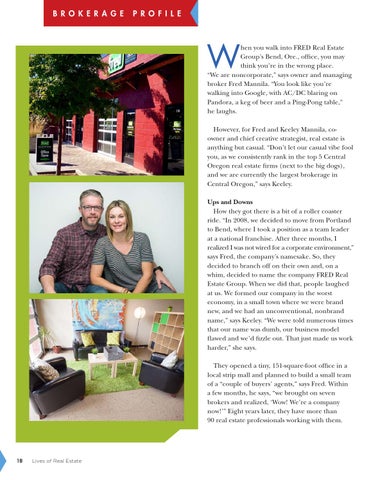 hen you walk into FRED Real Estate Group’s Bend, Ore., office, you may think you’re in the wrong place. “We are noncorporate,” says owner and managing broker Fred Mannila. “You look like you’re walking into Google, with AC/DC blaring on Pandora, a keg of beer and a Ping-Pong table,” he laughs. However, for Fred and Keeley Mannila, coowner and chief creative strategist, real estate is anything but casual. “Don’t let our casual vibe fool you, as we consistently rank in the top 5 Central Oregon real estate firms (next to the big dogs), and we are currently the largest brokerage in Central Oregon,” says Keeley. Ups and Downs How they got there is a bit of a roller coaster ride. “In 2008, we decided to move from Portland to Bend, where I took a position as a team leader at a national franchise. After three months, I realized I was not wired for a corporate environment,” says Fred, the company’s namesake. So, they decided to branch off on their own and, on a whim, decided to name the company FRED Real Estate Group. When we did that, people laughed at us. We formed our company in the worst economy, in a small town where we were brand new, and we had an unconventional, nonbrand name,” says Keeley. “We were told numerous times that our name was dumb, our business model flawed and we’d fizzle out. That just made us work harder,” she says. They opened a tiny, 151-square-foot office in a local strip mall and planned to build a small team of a “couple of buyers’ agents,” says Fred. Within a few months, he says, “we brought on seven brokers and realized, ‘Wow! We’re a company now!’” Eight years later, they have more than 90 real estate professionals working with them. 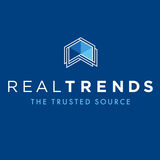 Welcome to the spring edition of LORE magazine! We’re bringing you the amazing stories of the lives of real estate (LORE) professionals in a...

Welcome to the spring edition of LORE magazine! We’re bringing you the amazing stories of the lives of real estate (LORE) professionals in a...