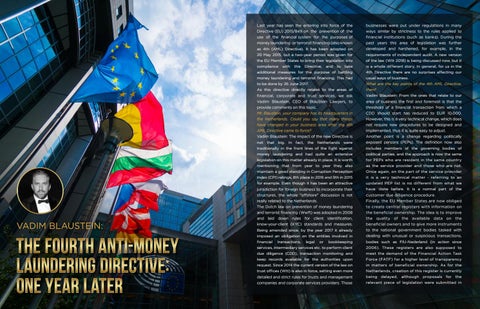 Last year has seen the entering into force of the

businesses were put under regulations in many

ways similar by strictness to the rules applied to

use of the financial system for the purposes of

financial institutions (such as banks). During the

past years this area of legislation was further

as 4th (AML) Directive). It has been adopted on

developed and harshened, for example, in the

the EU Member States to bring their legislation into

is a whole different story. In general, for us in the

additional measures for the purpose of battling

4th Directive there are no surprises affecting our

money laundering and terrorist financing. This had

What are the key points of the 4th AML Directive,

As this directive directly relates to the areas of

Vadim Blaustein: From the ones that relate to our

area of business the first and foremost is that the

provide comments on this topic.

threshold of a financial transaction from which a

Mr. Blaustein, your company has its headquarters in

the Netherlands. Could you say that many things

However, this is a very technical change, which does

have changed in your business area after the 4th

not require new procedures to be designed and

implemented, thus it is quite easy to adjust.

Vadim Blaustein: The impact of the new Directive is

Another point is a change regarding politically

not that big. In fact, the Netherlands were

traditionally in the front lines of the fight against

includes members of the governing bodies of

money laundering and had quite an extensive

political parties, and the approach is now the same

legislation on this matter already in place. It is worth

for PEPs who are resident in the same country

mentioning that from year to year they also

as the service provider and those who are not.

Once again, on the part of the service provider

it is a very technical matter - referring to an

for example. Even though it has been an attractive

updated PEP list is no different from what we

jurisdiction for foreign business to incorporate their

have done before. It is a normal part of the

structures, the whole "offshore" discussion is not

really related to the Netherlands.

The Dutch law on prevention of money laundering

to create central registers with information on

and terrorist financing (Wwft) was adopted in 2008

the beneficial ownership. The idea is to improve

and laid down rules for client identification,

beneficial owners and to give more instruments

Being amended since, by the year 2017 it already

to the national government bodies tasked with

imposed an obligation on the entities involved in

dealing with unusual or suspicious transactions,

bodies such as FIU-Nederland (in action since

2006). These registers are also supposed to

due diligence (CDD), transaction monitoring and

meet the demand of the Financial Action Task

keep records available for the authorities upon

Force (FATF) for a higher level of transparency

request. Since 2014 the current version of the law on

in matters of beneficial ownership. As for the

trust offices (Wtt) is also in force, setting even more

Netherlands, creation of this register is currently

detailed and strict rules for trusts and management

being delayed, although proposals for the

companies and corporate services providers. Those

relevant piece of legislation were submitted in

the first half of 2017. After its adoption, companies will have one and a half years to comply with the requirement. There are additional provisions regarding banks and gambling entities, but these are outside the scope of our business, so there is not much to comment. As you surely know, banks have always been subjected to special regulations and supervision from the authorities, and the same, but for a different reason, can be said about the gambling industry. Naturally, the strict control over the areas most vulnerable to money laundering and illegal financial activities must be an important part of any state AML/CTF policy. So the adoption of the AML Directive did not affect your services or your clients? Vadim Blaustein: It mainly did not. We had followed the strictest KYC/CDD procedures before and as part of these procedures established beneficiaries and ran background checks for each of our clients. It is true that disclosing client information to the authorities now is a requirement rather than a possibility; however, this data does not go public, thus observing confidentiality of the sensitive information. In this regard the anti-money laundering legislation is being affected and complemented by the new European legislation regarding personal data protection. The General Data Protection Regulation (GDPR) has entered into force very recently - on 25 May 2018, and is currently being paid a lot of attention by the authorities and controlling entities. And does this regulation demand more adjustments from you? Vadim Blaustein: It has some very specific requirements, and we must ensure that our policies are up-to-date with it in order to protect our clients' information. But this is a substantial topic of its own, so in order to avoid diversion from our theme today we can return to GDPR next time. As for the AML Directive, as I was saying, in our headquarters we are used to performing the KYC/CDD according to the strictest standards. However, we are active not only in the Netherlands; our offices are opened in other European countries.

Previously, some of them had less strict rules and procedures. Of course, this situation changes, and the KYC/CDD requirements become harmonized throughout Europe. Naturally, we adapt to it, and it helps a lot that we have been familiar with such requirements before and that our compliance work is centralized. Do you see such centralization as an advantage? The AML Directive provides that each Member State still can tailor their legislation on AML according to their needs, so it is not completely the same. Vadim Blaustein: We base our centralization on one of the strictest AML requirements in Europe. By this we ensure that CDD is always performed in the most enhanced way, even if it is not required by the authorities in a particular country. Maintaining a single database of clients does not divert many resources, but simplifies data protection and co-operation between our offices. It also falls within the corporate mission of BlauStein - to benefit to the financial and corporate services sector and improve its transparency and trustworthiness. So we consider it is an advantage, yes. What are your estimations regarding the foreign business and investors in the Netherlands now? It is very important to see the big picture. While the 4th Directive most likely will not have much impact, changes in other parts of Dutch legislation, such as corporate and tax, may actually cause the loss of some of the unique advantages the Netherlands had in the eyes of the international business. At the same time, worldwide developments and changes could bring new opportunities. In one of our previous interviews I have mentioned the chance which the Netherlands may get as the result of Brexit. Of course, as the process continues and the final arrangements are still vague, it is difficult to give a certain answer. But we remain optimistic and expect that we always will have interesting offers and solutions for our clients. Thank you for your interview.

More info about Vadim BlauStein and BlauStein Business Lawyers you can find on www.blaustein.pro 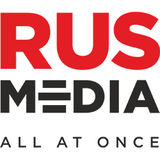 As this directive directly relates to the areas of financial, corporate and trust services, we ask Vadim Blaustein, CEO of BlauStein Lawyer...

As this directive directly relates to the areas of financial, corporate and trust services, we ask Vadim Blaustein, CEO of BlauStein Lawyer...