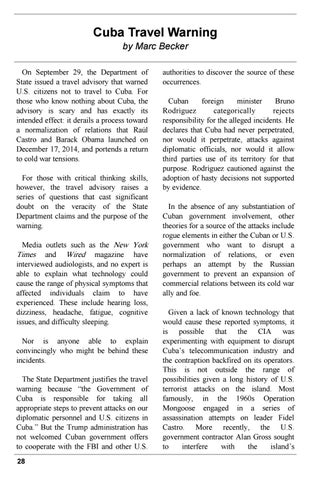 Cuba Travel Warning by Marc Becker On September 29, the Department of State issued a travel advisory that warned U.S. citizens not to travel to Cuba. For those who know nothing about Cuba, the advisory is scary and has exactly its intended effect: it derails a process toward a normalization of relations that Raúl Castro and Barack Obama launched on December 17, 2014, and portends a return to cold war tensions. For those with critical thinking skills, however, the travel advisory raises a series of questions that cast significant doubt on the veracity of the State Department claims and the purpose of the warning. Media outlets such as the New York and Wired magazine have interviewed audiologists, and no expert is able to explain what technology could cause the range of physical symptoms that affected individuals claim to have experienced. These include hearing loss, dizziness, headache, fatigue, cognitive issues, and difficulty sleeping.

Nor is anyone able to explain convincingly who might be behind these incidents. The State Department justifies the travel warning because “the Government of Cuba is responsible for taking all appropriate steps to prevent attacks on our diplomatic personnel and U.S. citizens in Cuba.” But the Trump administration has not welcomed Cuban government offers to cooperate with the FBI and other U.S. 28

authorities to discover the source of these occurrences. Cuban foreign minister Bruno Rodríguez categorically rejects responsibility for the alleged incidents. He declares that Cuba had never perpetrated, nor would it perpetrate, attacks against diplomatic officials, nor would it allow third parties use of its territory for that purpose. Rodríguez cautioned against the adoption of hasty decisions not supported by evidence. In the absence of any substantiation of Cuban government involvement, other theories for a source of the attacks include rogue elements in either the Cuban or U.S. government who want to disrupt a normalization of relations, or even perhaps an attempt by the Russian government to prevent an expansion of commercial relations between its cold war ally and foe. Given a lack of known technology that would cause these reported symptoms, it is possible that the CIA was experimenting with equipment to disrupt Cuba’s telecommunication industry and the contraption backfired on its operators. This is not outside the range of possibilities given a long history of U.S. terrorist attacks on the island. Most famously, in the 1960s Operation Mongoose engaged in a series of assassination attempts on leader Fidel Castro. More recently, the U.S. government contractor Alan Gross sought to interfere with the island’s 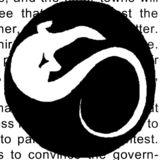