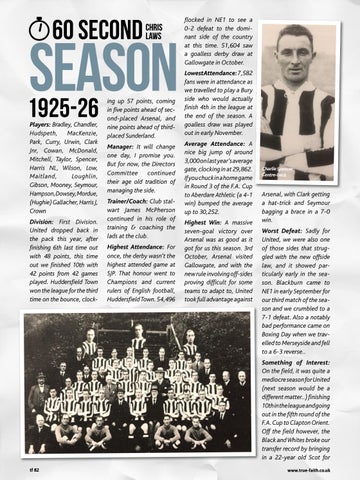 Manager: It will change one day, I promise you. But for now, the Directors Committee continued their age old tradition of managing the side. Trainer/Coach: Club stalwart James McPherson continued in his role of training &amp; coaching the lads at the club. Highest Attendance: For once, the derby wasnâ&amp;#x20AC;&amp;#x2122;t the highest attended game at SJP. That honour went to Champions and current rulers of English football, Huddersfield Town. 54,496

flocked in NE1 to see a 0-2 defeat to the dominant side of the country at this time. 51,604 saw a goalless derby draw at Gallowgate in October. LowestAttendance: 7,582 fans were in attendance as we travelled to play a Bury side who would actually finish 4th in the league at the end of the season. A goalless draw was played out in early November. Average Attendance: A nice big jump of around 3,000 on last yearâ&amp;#x20AC;&amp;#x2122;s average gate, clocking in at 29,862. If you chuck in a home game in Round 3 of the F.A. Cup to Aberdare Athletic (a 4-1 win) bumped the average up to 30,252. Highest Win: A massive seven-goal victory over Arsenal was as good as it got for us this season. 3rd October, Arsenal visited Gallowgate, and with the new rule involving off-sides proving difficult for some teams to adapt to, United took full advantage against

Arsenal, with Clark getting a hat-trick and Seymour bagging a brace in a 7-0 win. Worst Defeat: Sadly for United, we were also one of those sides that struggled with the new offside law, and it showed particularly early in the season. Blackburn came to NE1 in early September for our third match of the season and we crumbled to a 7-1 defeat. Also a notably bad performance came on Boxing Day when we travelled to Merseyside and fell to a 6-3 reverse.. Something of Interest: On the field, it was quite a mediocre season for United (next season would be a different matter..) finishing 10th in the league and going out in the fifth round of the F.A. Cup to Clapton Orient. Off the field however, the Black and Whites broke our transfer record by bringing in a 22-year old Scot for