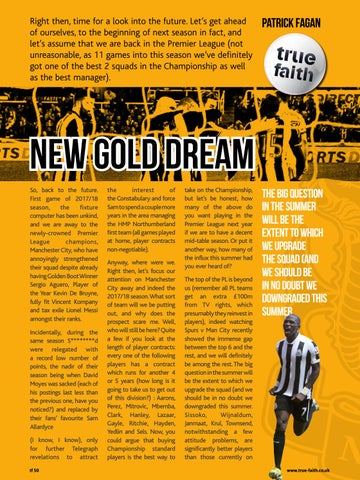 Right then, time for a look into the future. Let’s get ahead of ourselves, to the beginning of next season in fact, and let’s assume that we are back in the Premier League (not unreasonable, as 11 games into this season we’ve definitely got one of the best 2 squads in the Championship as well as the best manager).

new gold dream So, back to the future. First game of 2017/18 season, the fixture computer has been unkind, and we are away to the newly-crowned Premier League champions, Manchester City, who have annoyingly strengthened their squad despite already having Golden Boot Winner Sergio Aguero, Player of the Year Kevin De Bruyne, fully fit Vincent Kompany and tax exile Lionel Messi amongst their ranks. Incidentally, during the same season S********d were relegated with a record low number of points, the nadir of their season being when David Moyes was sacked (each of his postings last less than the previous one, have you noticed?) and replaced by their fans’ favourite Sam Allardyce (I know, I know), only for further Telegraph revelations to attract tf 50

the interest of the Constabulary and force Sam to spend a couple more years in the area managing the HMP Northumberland first team (all games played at home, player contracts non-negotiable). Anyway, where were we. Right then, let’s focus our attention on Manchester City away and indeed the 2017/18 season. What sort of team will we be putting out, and why does the prospect scare me. Well, who will still be here? Quite a few if you look at the length of player contracts: every one of the following players has a contract which runs for another 4 or 5 years (how long is it going to take us to get out of this division?) : Aarons, Perez, Mitrovic, Mbemba, Clark, Hanley, Lazaar, Gayle, Ritchie, Hayden, Yedlin and Sels. Now, you could argue that buying Championship standard players is the best way to

take on the Championship, but let’s be honest, how many of the above do you want playing in the Premier League next year if we are to have a decent mid-table season. Or put it another way, how many of the influx this summer had you ever heard of? The top of the PL is beyond us (remember all PL teams get an extra £100m from TV rights, which presumably they reinvest in players), indeed watching Spurs v Man City recently showed the immense gap between the top 6 and the rest, and we will definitely be among the rest. The big question in the summer will be the extent to which we upgrade the squad (and we should be in no doubt we downgraded this summer. Sissoko, Wijnaldum, Janmaat, Krul, Townsend, notwithstanding a few attitude problems, are significantly better players than those currently on