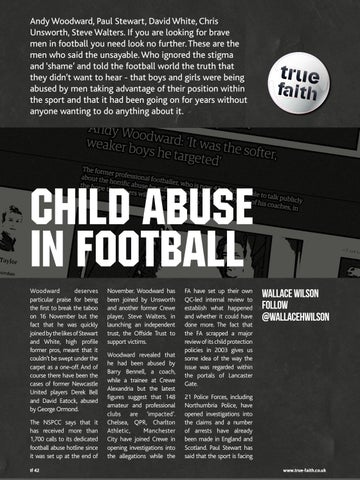 Andy Woodward, Paul Stewart, David White, Chris Unsworth, Steve Walters. If you are looking for brave men in football you need look no further. These are the men who said the unsayable. Who ignored the stigma and ‘shame’ and told the football world the truth that they didn’t want to hear - that boys and girls were being abused by men taking advantage of their position within the sport and that it had been going on for years without anyone wanting to do anything about it.

Child Abuse in Football Woodward deserves particular praise for being the first to break the taboo on 16 November but the fact that he was quickly joined by the likes of Stewart and White, high profile former pros, meant that it couldn’t be swept under the carpet as a one-off. And of course there have been the cases of former Newcastle United players Derek Bell and David Eatock, abused by George Ormond. The NSPCC says that it has received more than 1,700 calls to its dedicated football abuse hotline since it was set up at the end of tf 42

November. Woodward has been joined by Unsworth and another former Crewe player, Steve Walters, in launching an independent trust, the Offside Trust to support victims. Woodward revealed that he had been abused by Barry Bennell, a coach, while a trainee at Crewe Alexandria but the latest figures suggest that 148 amateur and professional clubs are ‘impacted’. Chelsea, QPR, Charlton Athletic, Manchester City have joined Crewe in opening investigations into the allegations while the

FA have set up their own QC-led internal review to establish what happened and whether it could have done more. The fact that the FA scrapped a major review of its child protection policies in 2003 gives us some idea of the way the issue was regarded within the portals of Lancaster Gate.

21 Police Forces, including Northumbria Police, have opened investigations into the claims and a number of arrests have already been made in England and Scotland. Paul Stewart has said that the sport is facing www.true-faith.co.uk