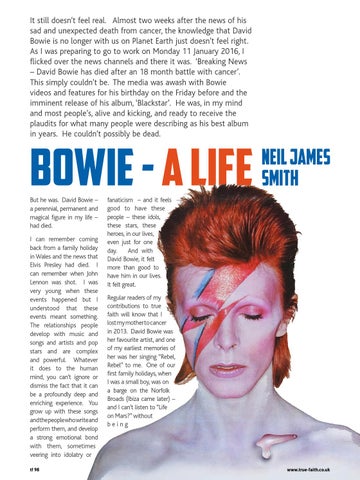 It still doesn’t feel real. Almost two weeks after the news of his sad and unexpected death from cancer, the knowledge that David Bowie is no longer with us on Planet Earth just doesn’t feel right. As I was preparing to go to work on Monday 11 January 2016, I flicked over the news channels and there it was. ‘Breaking News – David Bowie has died after an 18 month battle with cancer’. This simply couldn’t be. The media was awash with Bowie videos and features for his birthday on the Friday before and the imminent release of his album, ‘Blackstar’. He was, in my mind and most people’s, alive and kicking, and ready to receive the plaudits for what many people were describing as his best album in years. He couldn’t possibly be dead.

BOWIE - A LIFE But he was. David Bowie – a perennial, permanent and magical figure in my life – had died.

I can remember coming back from a family holiday in Wales and the news that Elvis Presley had died. I can remember when John Lennon was shot. I was very young when these events happened but I understood that these events meant something. The relationships people develop with music and songs and artists and pop stars and are complex and powerful. Whatever it does to the human mind, you can’t ignore or dismiss the fact that it can be a profoundly deep and enriching experience. You grow up with these songs and the people who write and perform them, and develop a strong emotional bond with them, sometimes veering into idolatry or tf 98

fanaticism – and it feels good to have these people – these idols, these stars, these heroes, in our lives, even just for one day. And with David Bowie, it felt more than good to have him in our lives. It felt great.

Regular readers of my contributions to true faith will know that I lost my mother to cancer in 2013. David Bowie was her favourite artist, and one of my earliest memories of her was her singing “Rebel, Rebel” to me. One of our first family holidays, when I was a small boy, was on a barge on the Norfolk Broads (Ibiza came later) – and I can’t listen to “Life on Mars?” without being