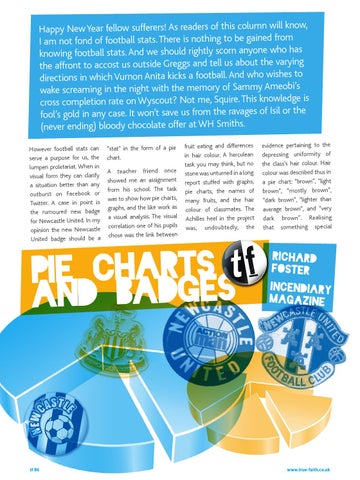 Happy New Year fellow sufferers! As readers of this column will know, I am not fond of football stats. There is nothing to be gained from knowing football stats. And we should rightly scorn anyone who has the affront to accost us outside Greggs and tell us about the varying directions in which Vurnon Anita kicks a football. And who wishes to wake screaming in the night with the memory of Sammy Ameobi’s cross completion rate on Wyscout? Not me, Squire. This knowledge is fool’s gold in any case. It won’t save us from the ravages of Isil or the (never ending) bloody chocolate offer at WH Smiths. However football stats can “stat” in the form of a pie serve a purpose for us, the chart. lumpen proletariat. When in A teacher friend once visual form they can clarify showed me an assignment a situation better than any from his school. The task outburst on Facebook or was to show how pie charts, Twitter. A case in point is graphs, and the like work as the rumoured new badge a visual analysis. The visual for Newcastle United. In my correlation one of his pupils opinion the new Newcastle chose was the link between United badge should be a

fruit eating and differences in hair colour. A herculean task you may think, but no stone was unturned in a long report stuffed with graphs, pie charts, the names of many fruits, and the hair colour of classmates. The Achilles heel in the project was, undoubtedly, the