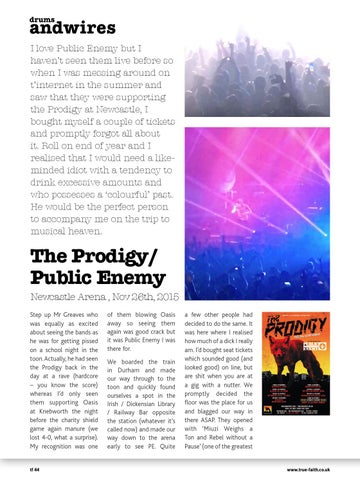 I love Public Enemy but I haven’t seen them live before so when I was messing around on t’internet in the summer and saw that they were supporting the Prodigy at Newcastle, I bought myself a couple of tickets and promptly forgot all about it. Roll on end of year and I realised that I would need a likeminded idiot with a tendency to drink excessive amounts and who possesses a ‘colourful’ past. He would be the perfect person to accompany me on the trip to musical heaven.

Newcastle Arena , Nov 26th, 2015 Step up Mr Greaves who was equally as excited about seeing the bands as he was for getting pissed on a school night in the toon. Actually, he had seen the Prodigy back in the day at a rave (hardcore – you know the score) whereas I’d only seen them supporting Oasis at Knebworth the night before the charity shield game again manure (we lost 4-0, what a surprise). My recognition was one

of them blowing Oasis away so seeing them again was good crack but it was Public Enemy I was there for. We boarded the train in Durham and made our way through to the toon and quickly found ourselves a spot in the Irish / Dickensian Library / Railway Bar opposite the station (whatever it’s called now) and made our way down to the arena early to see PE. Quite

a few other people had decided to do the same. It was here where I realised how much of a dick I really am. I’d bought seat tickets which sounded good (and looked good) on line, but are shit when you are at a gig with a nutter. We promptly decided the floor was the place for us and blagged our way in there ASAP. They opened with ‘Miuzi Weighs a Ton and Rebel without a Pause’ (one of the greatest