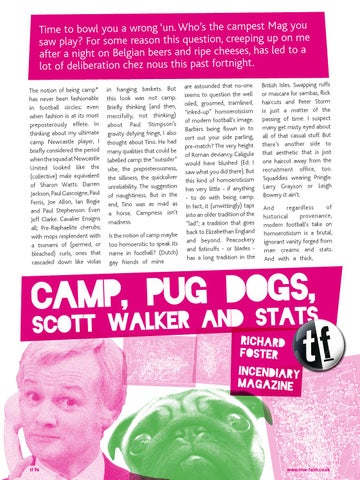 Time to bowl you a wrong ‘un. Who’s the campest Mag you saw play? For some reason this question, creeping up on me after a night on Belgian beers and ripe cheeses, has led to a lot of deliberation chez nous this past fortnight. The notion of being camp* has never been fashionable in football circles; even when fashion is at its most preposterously effete. In thinking about my ultimate camp Newcastle player, I briefly considered the period when the squad at Newcastle United looked like the (collective) male equivalent of Sharon Watts. Darren Jackson, Paul Gascoigne, Paul Ferris, Joe Allon, Ian Bogie and Paul Stephenson. Even Jeff Clarke. Cavalier Ensigns all; Pre-Raphaelite cherubs; with mops resplendent with a tsunami of (permed, or bleached) curls, ones that cascaded down like violas

astounded that no-one British Isles. Swapping ruffs in hanging baskets. But are seems to question the well or mascara for sambas, flick this look was not camp. oiled, groomed, tramlined, haircuts and Peter Storm Briefly thinking (and then, “inked-up” homoeroticism is just a matter of the ng) thinki not mercifully, of modern football’s image. passing of time. I suspect about Paul Stimpson’s Barbers being flown in to many get misty eyed about gravity defying fringe, I also sort out your side parting, all of that casual stuff. But had He Tino. thought about pre-match? The very height there’s another side to many qualities that could be of Roman deviancy. Caligula that aesthetic that is just labelled camp: the “outsider” would have blushed (Ed: I one haircut away from the vibe, the preposterousness, saw what you did there). But recruitment office, too. the silliness, the quicksilver this kind of homoeroticism Squaddies wearing Pringle. unreliability. The suggestion has very little - if anything Larry Grayson or Leigh of naughtiness. But in the - to do with being camp. Bowery it ain’t. end, Tino was as mad as In fact, it (unwittingly) taps of regardless And isn’t ness Camp . horse a into an older tradition of the historical provenance, madness. goes “lad”; a tradition that modern football’s take on back to Elizabethan England homoeroticism is a brutal, Is the notion of camp maybe and beyond. Peacockery ignorant vanity forged from too homoerotic to speak its and fisticuffs - or blades - man creams and stats. name in football? (Dutch) has a long tradition in the And with a thick, gay friends of mine