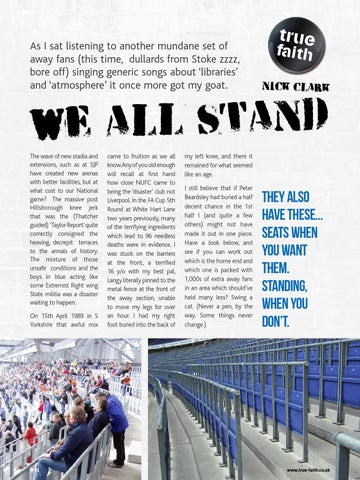 As I sat listening to another mundane set of away fans (this time, dullards from Stoke zzzz, bore off) singing generic songs about ‘libraries’ and ‘atmosphere’ it once more got my goat.

The wave of new stadia and extensions, such as at SJP have created new arenas with better facilities, but at what cost to our National game? The massive post Hillsborough knee jerk that was the (Thatcher guided) ‘Taylor Report’ quite correctly consigned the heaving, decrepit terraces to the annals of history. The mixture of those unsafe conditions and the boys in blue acting like some Extremist Right wing State militia was a disaster waiting to happen. On 15th April 1989 in S Yorkshire that awful mix

came to fruition as we all know.Any of you old enough will recall at first hand how close NUFC came to being the ‘disaster’ club not Liverpool. In the FA Cup 5th Round at White Hart Lane two years previously, many of the terrifying ingredients which lead to 96 needless deaths were in evidence. I was stuck on the barriers at the front, a terrified 16 y/o with my best pal, Langy literally pinned to the metal fence at the front of the away section, unable to move my legs for over an hour. I had my right foot buried into the back of

my left knee, and there it remained for what seemed like an age.

I still believe that if Peter Beardsley had buried a half decent chance in the 1st half I (and quite a few others) might not have made it out in one piece. Have a look below, and see if you can work out which is the home end and which one is packed with 1,000s of extra away fans in an area which should’ve held many less? Swing a cat. (Never a pen, by the way. Some things never change.)

They also have these... Seats when you want them. Standing, when you don’t.