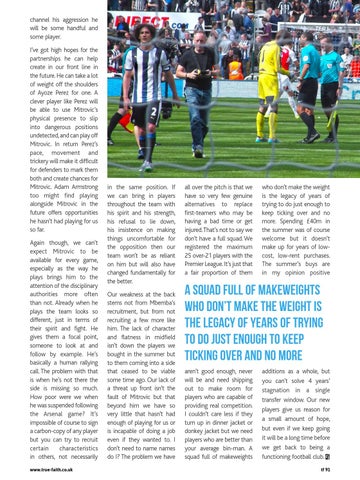 channel his aggression he will be some handful and some player. I’ve got high hopes for the partnerships he can help create in our front line in the future. He can take a lot of weight off the shoulders of Ayoze Perez for one. A clever player like Perez will be able to use Mitrovic’s physical presence to slip into dangerous positions undetected, and can play off Mitrovic. In return Perez’s pace, movement and trickery will make it difficult for defenders to mark them both and create chances for Mitrovic. Adam Armstrong too might find playing alongside Mitrovic in the future offers opportunities he hasn’t had playing for us so far. Again though, we can’t expect Mitrovic to be available for every game, especially as the way he plays brings him to the attention of the disciplinary authorities more often than not. Already when he plays the team looks so different, just in terms of their spirit and fight. He gives them a focal point, someone to look at and follow by example. He’s basically a human rallying call. The problem with that is when he’s not there the side is missing so much. How poor were we when he was suspended following the Arsenal game? It’s impossible of course to sign a carbon-copy of any player but you can try to recruit certain characteristics in others, not necessarily www.true-faith.co.uk

in the same position. If we can bring in players throughout the team with his spirit and his strength, his refusal to lie down, his insistence on making things uncomfortable for the opposition then our team won’t be as reliant on him but will also have changed fundamentally for the better. Our weakness at the back stems not from Mbemba’s recruitment, but from not recruiting a few more like him. The lack of character and flatness in midfield isn’t down the players we bought in the summer but to them coming into a side that ceased to be viable some time ago. Our lack of a threat up front isn’t the fault of Mitrovic but that beyond him we have so very little that hasn’t had enough of playing for us or is incapable of doing a job even if they wanted to. I don’t need to name names do I? The problem we have

all over the pitch is that we have so very few genuine alternatives to replace first-teamers who may be having a bad time or get injured. That’s not to say we don’t have a full squad. We registered the maximum 25 over-21 players with the Premier League. It’s just that a fair proportion of them

who don’t make the weight is the legacy of years of trying to do just enough to keep ticking over and no more. Spending £40m in the summer was of course welcome but it doesn’t make up for years of lowcost, low-rent purchases. The summer’s buys are in my opinion positive

A squad full of makeweights who don’t make the weight is the legacy of years of trying to do just enough to keep ticking over and no more aren’t good enough, never will be and need shipping out to make room for players who are capable of providing real competition. I couldn’t care less if they turn up in dinner jacket or donkey jacket but we need players who are better than your average bin-man. A squad full of makeweights

additions as a whole, but you can’t solve 4 years’ stagnation in a single transfer window. Our new players give us reason for a small amount of hope, but even if we keep going it will be a long time before we get back to being a functioning football club. tf 91