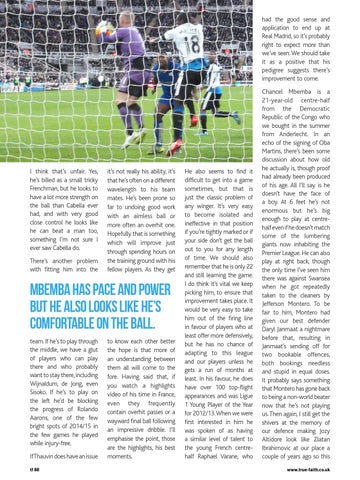 had the good sense and application to end up at Real Madrid, so it’s probably right to expect more than we’ve seen. We should take it as a positive that his pedigree suggests there’s improvement to come.

I think that’s unfair. Yes, he’s billed as a small tricky Frenchman, but he looks to have a lot more strength on the ball than Cabella ever had, and with very good close control he looks like he can beat a man too, something I’m not sure I ever saw Cabella do. There’s another problem with fitting him into the

it’s not really his ability, it’s that he’s often on a different wavelength to his team mates. He’s been prone so far to undoing good work with an aimless ball or more often an overhit one. Hopefully that is something which will improve just through spending hours on the training ground with his fellow players. As they get

Mbemba has pace and power but he also looks like he’s comfortable on the ball. team. If he’s to play through the middle, we have a glut of players who can play there and who probably want to stay there, including Wijnaldum, de Jong, even Sisoko. If he’s to play on the left he’d be blocking the progress of Rolando Aarons, one of the few bright spots of 2014/15 in the few games he played while injury-free. If Thauvin does have an issue tf 88

to know each other better the hope is that more of an understanding between them all will come to the fore. Having said that, if you watch a highlights video of his time in France, even they frequently contain overhit passes or a wayward final ball following an impressive dribble. I’ll emphasise the point, those are the highlights, his best moments.

He also seems to find it difficult to get into a game sometimes, but that is just the classic problem of any winger. It’s very easy to become isolated and ineffective in that position if you’re tightly marked or if your side don’t get the ball out to you for any length of time. We should also remember that he is only 22 and still learning the game. I do think it’s vital we keep picking him, to ensure that improvement takes place. It would be very easy to take him out of the firing line in favour of players who at least offer more defensively, but he has no chance of adapting to this league and our players unless he gets a run of months at least. In his favour, he does have over 100 top-flight appearances and was Ligue 1 Young Player of the Year for 2012/13. When we were first interested in him he was spoken of as having a similar level of talent to the young French centrehalf Raphael Varane, who

Chancel Mbemba is a 21-year-old centre-half from the Democratic Republic of the Congo who we bought in the summer from Anderlecht. In an echo of the signing of Oba Martins, there’s been some discussion about how old he actually is, though proof had already been produced of his age. All I’ll say is he doesn’t have the face of a boy. At 6 feet he’s not enormous but he’s big enough to play at centrehalf even if he doesn’t match some of the lumbering giants now inhabiting the Premier League. He can also play at right back, though the only time I’ve seen him there was against Swansea when he got repeatedly taken to the cleaners by Jefferson Montero. To be fair to him, Montero had given our best defender Daryl Janmaat a nightmare before that, resulting in Janmaat’s sending off for two bookable offences, both bookings needless and stupid in equal doses. It probably says something that Montero has gone back to being a non-world beater now that he’s not playing us. Then again, I still get the shivers at the memory of our defence making Jozy Altidore look like Zlatan Ibrahimovic at our place a couple of years ago so this www.true-faith.co.uk