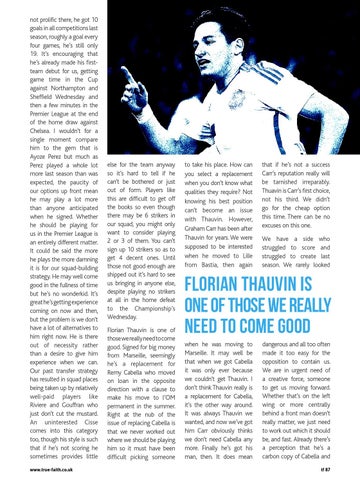 not prolific there, he got 10 goals in all competitions last season, roughly a goal every four games, he’s still only 19. It’s encouraging that he’s already made his firstteam debut for us, getting game time in the Cup against Northampton and Sheffield Wednesday and then a few minutes in the Premier League at the end of the home draw against Chelsea. I wouldn’t for a single moment compare him to the gem that is Ayoze Perez but much as Perez played a whole lot more last season than was expected, the paucity of our options up front mean he may play a lot more than anyone anticipated when he signed. Whether he should be playing for us in the Premier League is an entirely different matter. It could be said the more he plays the more damning it is for our squad-building strategy. He may well come good in the fullness of time but he’s no wonderkid. It’s great he’s getting experience coming on now and then, but the problem is we don’t have a lot of alternatives to him right now. He is there out of necessity rather than a desire to give him experience when we can. Our past transfer strategy has resulted in squad places being taken up by relatively well-paid players like Riviere and Gouffran who just don’t cut the mustard. An uninterested Cisse comes into this category too, though his style is such that if he’s not scoring he sometimes provides little www.true-faith.co.uk

else for the team anyway so it’s hard to tell if he can’t be bothered or just out of form. Players like this are difficult to get off the books so even though there may be 6 strikers in our squad, you might only want to consider playing 2 or 3 of them. You can’t sign up 10 strikers so as to get 4 decent ones. Until those not good enough are shipped out it’s hard to see us bringing in anyone else, despite playing no strikers at all in the home defeat to the Championship’s Wednesday. Florian Thauvin is one of those we really need to come good. Signed for big money from Marseille, seemingly he’s a replacement for Remy Cabella who moved on loan in the opposite direction with a clause to make his move to l’OM permanent in the summer. Right at the nub of the issue of replacing Cabella is that we never worked out where we should be playing him so it must have been difficult picking someone

to take his place. How can you select a replacement when you don’t know what qualities they require? Not knowing his best position can’t become an issue with Thauvin. However, Graham Carr has been after Thauvin for years. We were supposed to be interested when he moved to Lille from Bastia, then again

that if he’s not a success Carr’s reputation really will be tarnished irreparably. Thuavin is Carr’s first choice, not his third. We didn’t go for the cheap option this time. There can be no excuses on this one. We have a side who struggled to score and struggled to create last season. We rarely looked

Florian Thauvin is one of those we really need to come good when he was moving to Marseille. It may well be that when we got Cabella it was only ever because we couldn’t get Thauvin. I don’t think Thauvin really is a replacement for Cabella, it’s the other way around. It was always Thauvin we wanted, and now we’ve got him Carr obviously thinks we don’t need Cabella any more. Finally he’s got his man, then. It does mean

dangerous and all too often made it too easy for the opposition to contain us. We are in urgent need of a creative force, someone to get us moving forward. Whether that’s on the left wing or more centrally behind a front man doesn’t really matter, we just need to work out which it should be, and fast. Already there’s a perception that he’s a carbon copy of Cabella and tf 87