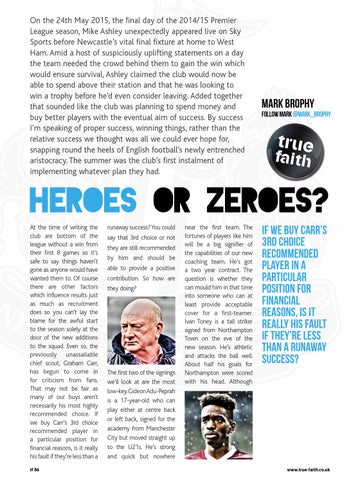 On the 24th May 2015, the final day of the 2014/15 Premier League season, Mike Ashley unexpectedly appeared live on Sky Sports before Newcastle’s vital final fixture at home to West Ham. Amid a host of suspiciously uplifting statements on a day the team needed the crowd behind them to gain the win which would ensure survival, Ashley claimed the club would now be able to spend above their station and that he was looking to win a trophy before he’d even consider leaving. Added together that sounded like the club was planning to spend money and buy better players with the eventual aim of success. By success I’m speaking of proper success, winning things, rather than the relative success we thought was all we could ever hope for, snapping round the heels of English football’s newly entrenched aristocracy. The summer was the club’s first instalment of implementing whatever plan they had.

HEROES OR ZEROES? At the time of writing the club are bottom of the league without a win from their first 8 games so it’s safe to say things haven’t gone as anyone would have wanted them to. Of course there are other factors which influence results just as much as recruitment does so you can’t lay the blame for the awful start to the season solely at the door of the new additions to the squad. Even so, the previously unassailable chief scout, Graham Carr, has begun to come in for criticism from fans. That may not be fair as many of our buys aren’t necessarily his most highly recommended choice. If we buy Carr’s 3rd choice recommended player in a particular position for financial reasons, is it really his fault if they’re less than a tf 86

runaway success? You could say that 3rd choice or not they are still recommended by him and should be able to provide a positive contribution. So how are they doing?

The first two of the signings we’ll look at are the most low-key.Gideon Adu-Peprah is a 17-year-old who can play either at centre back or left back, signed for the academy from Manchester City but moved straight up to the U21s. He’s strong and quick but nowhere

near the first team. The fortunes of players like him will be a big signifier of the capabilities of our new coaching team. He’s got a two year contract. The question is whether they can mould him in that time into someone who can at least provide acceptable cover for a first-teamer. Ivan Toney is a tall striker signed from Northampton Town on the eve of the new season. He’s athletic and attacks the ball well. About half his goals for Northampton were scored with his head. Although

If we buy Carr’s 3rd choice recommended player in a particular position for financial reasons, is it really his fault if they’re less than a runaway success?