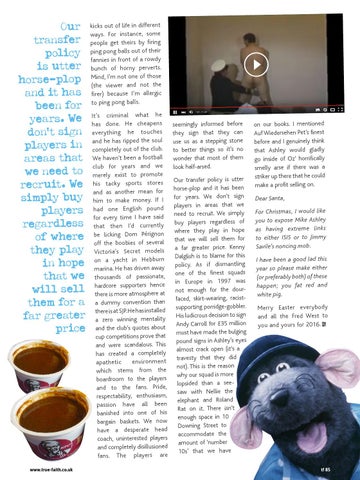 Our transfer policy is utter horse-plop and it has been for years. We don’t sign players in areas that we need to recruit. We simply buy players regardless of where they play in hope that we will sell them for a far greater price

kicks out of life in different ways. For instance, some people get theirs by firing ping pong balls out of their fannies in front of a rowdy bunch of horny perverts. Mind, I’m not one of those (the viewer and not the firer) because I’m allergic to ping pong balls. It’s criminal what he has done. He cheapens everything he touches and he has ripped the soul completely out of the club. We haven’t been a football club for years and we merely exist to promote his tacky sports stores and as another mean for him to make money. If I had one English pound for every time I have said that then I’d currently be licking Dom Pérignon off the boobies of several Victoria’s Secret models on a yacht in Hebburn marina. He has driven away thousands of passionate, hardcore supporters hence there is more atmosphere at a dummy convention than there is at SJP. He has installed a zero winning mentality and the club’s quotes about cup competitions prove that and were scandalous. This has created a completely environment apathetic which stems from the boardroom to the players and to the fans. Pride, respectability, enthusiasm, passion have all been banished into one of his bargain baskets. We now have a desperate head coach, uninterested players and completely disillusioned fans. The players are

seemingly informed before they sign that they can use us as a stepping stone to better things so it’s no wonder that most of them look half-arsed. Our transfer policy is utter horse-plop and it has been for years. We don’t sign players in areas that we need to recruit. We simply buy players regardless of where they play in hope that we will sell them for a far greater price. Kenny Dalglish is to blame for this policy. As if dismantling one of the finest squads in Europe in 1997 was not enough for the dourfaced, skirt-wearing, racistsupporting porridge-gobbler. His ludicrous decision to sign Andy Carroll for £35 million must have made the bulging pound signs in Ashley’s eyes almost crack open (it’s a travesty that they did not). This is the reason why our squad is more lopsided than a seesaw with Nellie the elephant and Roland Rat on it. There isn’t enough space in 10 Downing Street to accommodate the amount of ‘number 10s’ that we have

on our books. I mentioned Auf Wiedersehen Pet’s finest before and I genuinely think that Ashley would gladly go inside of Oz’ horrifically smelly arse if there was a striker up there that he could make a profit selling on. Dear Santa, For Christmas, I would like you to expose Mike Ashley as having extreme links to either ISIS or to Jimmy Savile’s noncing mob. I have been a good lad this year so please make either (or preferably both) of these happen; you fat red and white pig. Merry Easter everybody and all the Fred West to you and yours for 2016.