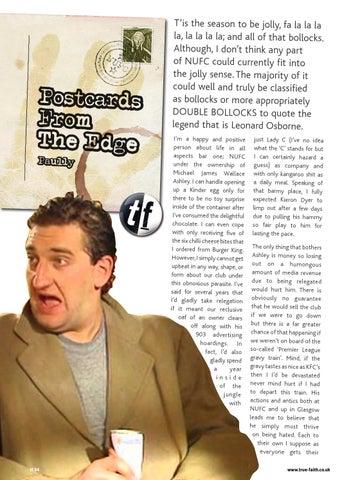 T’is the season to be jolly, fa la la la la, la la la la; and all of that bollocks. Although, I don’t think any part of NUFC could currently fit into the jolly sense. The majority of it could well and truly be classified as bollocks or more appropriately DOUBLE BOLLOCKS to quote the legend that is Leonard Osborne. I’m a happy and positive person about life in all aspects bar one; NUFC under the ownership of Michael James Wallace Ashley. I can handle opening up a Kinder egg only for there to be no toy surprise inside of the container after I’ve consumed the delightful chocolate. I can even cope with only receiving five of the six chilli cheese bites that I ordered from Burger King. However, I simply cannot get upbeat in any way, shape, or form about our club under this obnoxious parasite. I’ve said for several years that I’d gladly take relegation if it meant our reclusive oaf of an owner clears off along with his 903 advertising hoardings. In fact, I’d also gladly spend a year inside of the jungl e with

just Lady C (I’ve no idea what the ‘C’ stands for but I can certainly hazard a guess) as company and with only kangaroo shit as a daily meal. Speaking of that barmy place, I fully expected Kieron Dyer to limp out after a few days due to pulling his hammy so fair play to him for lasting the pace. The only thing that bothers Ashley is money so losing out on a humongous amount of media revenue due to being relegated would hurt him. There is obviously no guarantee that he would sell the club if we were to go down but there is a far greater chance of that happening if we weren’t on board of the so-called ‘Premier League gravy train’. Mind, if the gravy tastes as nice as KFC’s then I I’d be devastated never mind hurt if I had to depart this train. His actions and antics both at NUFC and up in Glasgow leads me to believe that he simply must thrive on being hated. Each to their own I suppose as everyone gets their www.true-faith.co.uk