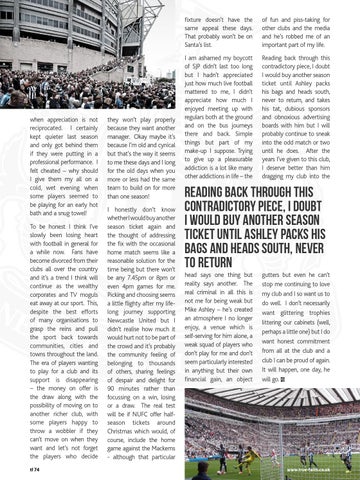 when appreciation is not reciprocated. I certainly kept quieter last season and only got behind them if they were putting in a professional performance. I felt cheated – why should I give them my all on a cold, wet evening when some players seemed to be playing for an early hot bath and a snug towel! To be honest I think I’ve slowly been losing heart with football in general for a while now. Fans have become divorced from their clubs all over the country and it’s a trend I think will continue as the wealthy corporates and TV moguls eat away at our sport. This, despite the best efforts of many organisations to grasp the reins and pull the sport back towards communities, cities and towns throughout the land. The era of players wanting to play for a club and its support is disappearing – the money on offer is the draw along with the possibility of moving on to another richer club, with some players happy to throw a wobbler if they can’t move on when they want and let’s not forget the players who decide tf 74

they won’t play properly because they want another manager. Okay maybe it’s because I’m old and cynical but that’s the way it seems to me these days and I long for the old days when you more or less had the same team to build on for more than one season! I honestly don’t know whether I would buy another season ticket again and the thought of addressing the fix with the occasional home match seems like a reasonable solution for the time being but there won’t be any 7.45pm or 8pm or even 4pm games for me. Picking and choosing seems a little flighty after my lifelong journey supporting Newcastle United but I didn’t realise how much it would hurt not to be part of the crowd and it’s probably the community feeling of belonging to thousands of others, sharing feelings of despair and delight for 90 minutes rather than focussing on a win, losing or a draw. The real test will be if NUFC offer halfseason tickets around Christmas which would, of course, include the home game against the Mackems - although that particular

fixture doesn’t have the same appeal these days. That probably won’t be on Santa’s list.

of fun and piss-taking for other clubs and the media and he’s robbed me of an important part of my life.

I am ashamed my boycott of SJP didn’t last too long but I hadn’t appreciated just how much live football mattered to me, I didn’t appreciate how much I enjoyed meeting up with regulars both at the ground and on the bus journeys there and back. Simple things but part of my make-up I suppose. Trying to give up a pleasurable addiction is a lot like many other addictions in life – the

Reading back through this contradictory piece, I doubt I would buy another season ticket until Ashley packs his bags and heads south, never to return, and takes his tat, dubious sponsors and obnoxious advertising boards with him but I will probably continue to sneak into the odd match or two until he does. After the years I’ve given to this club, I deserve better than him dragging my club into the

Reading back through this contradictory piece, I doubt I would buy another season ticket until Ashley packs his bags and heads south, never to return head says one thing but reality says another. The real criminal in all this is not me for being weak but Mike Ashley – he’s created an atmosphere I no longer enjoy, a venue which is self-serving for him alone, a weak squad of players who don’t play for me and don’t seem particularly interested in anything but their own financial gain, an object

gutters but even he can’t stop me continuing to love my club and I so want us to do well. I don’t necessarily want glittering trophies littering our cabinets (well, perhaps a little one) but I do want honest commitment from all at the club and a club I can be proud of again. It will happen, one day, he will go.