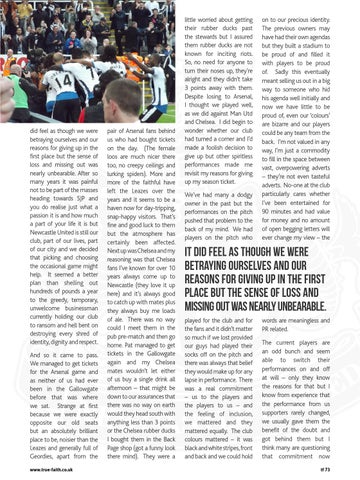 did feel as though we were betraying ourselves and our reasons for giving up in the first place but the sense of loss and missing out was nearly unbearable. After so many years it was painful not to be part of the masses heading towards SJP and you do realise just what a passion it is and how much a part of your life it is but Newcastle United is still our club, part of our lives, part of our city and we decided that picking and choosing the occasional game might help. It seemed a better plan than shelling out hundreds of pounds a year to the greedy, temporary, unwelcome businessman currently holding our club to ransom and hell bent on destroying every shred of identity, dignity and respect. And so it came to pass. We managed to get tickets for the Arsenal game and as neither of us had ever been in the Gallowgate before that was where we sat. Strange at first because we were exactly opposite our old seats but an absolutely brilliant place to be, noisier than the Leazes and generally full of Geordies, apart from the www.true-faith.co.uk

pair of Arsenal fans behind us who had bought tickets on the day. (The female loos are much nicer there too, no creepy ceilings and lurking spiders). More and more of the faithful have left the Leazes over the years and it seems to be a haven now for day-tripping, snap-happy visitors. That’s fine and good luck to them but the atmosphere has certainly been affected. Next up was Chelsea and my reasoning was that Chelsea fans I’ve known for over 10 years always come up to Newcastle (they love it up here) and it’s always good to catch up with mates plus they always buy me loads of ale. There was no way could I meet them in the pub pre-match and then go home. Pat managed to get tickets in the Gallowgate again and my Chelsea mates wouldn’t let either of us buy a single drink all afternoon – that might be down to our assurances that there was no way on earth would they head south with anything less than 3 points or the Chelsea rubber ducks I bought them in the Back Page shop (got a funny look there mind). They were a

little worried about getting their rubber ducks past the stewards but I assured them rubber ducks are not known for inciting riots. So, no need for anyone to turn their noses up, they’re alright and they didn’t take 3 points away with them. Despite losing to Arsenal, I thought we played well, as we did against Man Utd and Chelsea. I did begin to wonder whether our club had turned a corner and I’d made a foolish decision to give up but other spiritless performances made me revisit my reasons for giving up my season ticket. We’ve had many a dodgy owner in the past but the performances on the pitch pushed that problem to the back of my mind. We had players on the pitch who

on to our precious identity. The previous owners may have had their own agendas but they built a stadium to be proud of and filled it with players to be proud of. Sadly this eventually meant selling us out in a big way to someone who hid his agenda well initially and now we have little to be proud of, even our ‘colours’ are bizarre and our players could be any team from the back. I’m not valued in any way, I’m just a commodity to fill in the space between vast, overpowering adverts – they’re not even tasteful adverts. No-one at the club particularly cares whether I’ve been entertained for 90 minutes and had value for money and no amount of open begging letters will ever change my view – the

It did feel as though we were betraying ourselves and our reasons for giving up in the first place but the sense of loss and missing out was nearly unbearable. played for the club and for the fans and it didn’t matter so much if we lost provided our guys had played their socks off on the pitch and there was always that belief they would make up for any lapse in performance. There was a real commitment – us to the players and the players to us – and the feeling of inclusion, we mattered and they mattered equally. The club colours mattered – it was black and white stripes, front and back and we could hold

words are meaningless and PR related. The current players are an odd bunch and seem able to switch their performances on and off at will – only they know the reasons for that but I know from experience that the performance from us supporters rarely changed, we usually gave them the benefit of the doubt and got behind them but I think many are questioning that commitment now tf 73