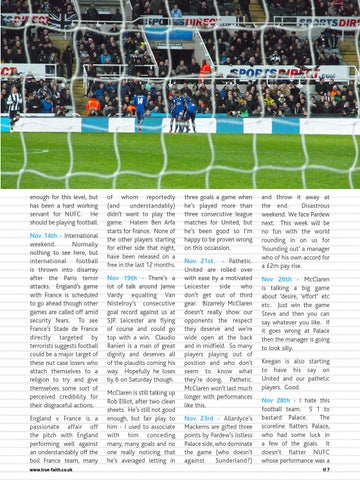 enough for this level, but has been a hard working servant for NUFC. He should be playing football. Nov 14th - International weekend. Normally nothing to see here, but international football is thrown into disarray after the Paris terror attacks. England’s game with France is scheduled to go ahead though other games are called off amid security fears. To see France’s Stade de France directly targeted by terrorists suggests football could be a major target of these nut case losers who attach themselves to a religion to try and give themselves some sort of perceived credibility for their disgraceful actions. England v France is a passionate affair off the pitch with England performing well against an understandably off the boil France team, many www.true-faith.co.uk

of whom reportedly (and understandably) didn’t want to play the game. Hatem Ben Arfa starts for France. None of the other players starting for either side that night, have been released on a free in the last 12 months. Nov 19th - There’s a lot of talk around Jamie Vardy equalling Van Nistelroy’s consecutive goal record against us at SJP. Leicester are flying of course and could go top with a win. Claudio Ranieri is a man of great dignity and deserves all of the plaudits coming his way. Hopefully he loses by 6 on Saturday though. McClaren is still talking up Rob Elliot, after two clean sheets. He’s still not good enough, but fair play to him - I used to associate with him conceding many, many goals and no one really noticing that he’s averaged letting in

three goals a game when he’s played more than three consecutive league matches for United, but he’s been good so I’m happy to be proven wrong on this occassion. Nov 21st - Pathetic. United are rolled over with ease by a motivated Leicester side who don’t get out of third gear. Bizarrely McClaren doesn’t really show our opponents the respect they deserve and we’re wide open at the back and in midfield. So many players playing out of position and who don’t seem to know what they’re doing. Pathetic. McClaren won’t last much longer with performances like this. Nov 23rd - Allardyce’s Mackems are gifted three points by Pardew’s listless Palace side, who dominate the game (who doesn’t against Sunderland?)

and throw it away at the end. Disastrous weekend. We face Pardew next. This week will be no fun with the world rounding in on us for ‘hounding out’ a manager who of his own accord for a £2m pay rise. Nov 26th - McClaren is talking a big game about ‘desire, ‘effort’ etc etc. Just win the game Steve and then you can say whatever you like. If it goes wrong at Palace then the manager is going to look silly. Keegan is also starting to have his say on United and our pathetic players. Good. Nov 28th - I hate this football team. 5 1 to bastard Palace. The scoreline flatters Palace, who had some luck in a few of the goals. It doesn’t flatter NUFC whose performance was a tf 7