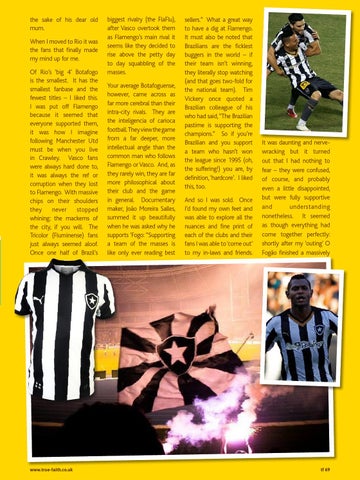 the sake of his dear old mum. When I moved to Rio it was the fans that finally made my mind up for me. Of Rio’s ‘big 4’ Botafogo is the smallest. It has the smallest fanbase and the fewest titles – I liked this. I was put off Flamengo because it seemed that everyone supported them, it was how I imagine following Manchester Utd must be when you live in Crawley. Vasco fans were always hard done to, it was always the ref or corruption when they lost to Flamengo. With massive chips on their shoulders they never stopped whining: the mackems of the city, if you will. The Tricolor (Fluminense) fans just always seemed aloof. Once one half of Brazil’s

biggest rivalry (the FlaFlu), after Vasco overtook them as Flamengo’s main rival it seems like they decided to rise above the petty day to day squabbling of the masses. Your average Botafoguense, however, came across as far more cerebral than their intra-city rivals. They are the inteligencia of carioca football. They view the game from a far deeper, more intellectual angle than the common man who follows Flamengo or Vasco. And, as they rarely win, they are far more philosophical about their club and the game in general. Documentary maker, João Moreira Salles, summed it up beautifully when he was asked why he supports ‘Fogo: “Supporting a team of the masses is like only ever reading best

sellers.” What a great way to have a dig at Flamengo. It must also be noted that Brazilians are the ficklest buggers in the world – if their team isn’t winning, they literally stop watching (and that goes two-fold for the national team). Tim Vickery once quoted a Brazilian colleague of his who had said, “The Brazilian pastime is supporting the champions.” So if you’re Brazilian and you support a team who hasn’t won the league since 1995 (oh, the suffering!) you are, by definition, ‘hardcore’. I liked this, too. And so I was sold. Once I’d found my own feet and was able to explore all the nuances and fine print of each of the clubs and their fans I was able to ‘come out’ to my in-laws and friends.

It was daunting and nervewracking but it turned out that I had nothing to fear – they were confused, of course, and probably even a little disappointed, but were fully supportive and understanding nonetheless. It seemed as though everything had come together perfectly: shortly after my ‘outing’ O Fogão finished a massively