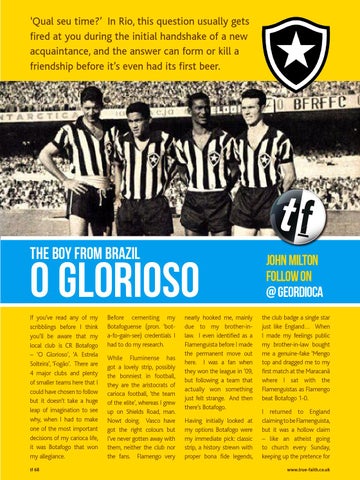 ‘Qual seu time?’ In Rio, this question usually gets fired at you during the initial handshake of a new acquaintance, and the answer can form or kill a friendship before it’s even had its first beer.

The boy from brazil

O Glorioso If you’ve read any of my scribblings before I think you’ll be aware that my local club is CR Botafogo – ‘O Glorioso’, ‘A Estrela Solteira’, ‘Fogão’. There are 4 major clubs and plenty of smaller teams here that I could have chosen to follow but it doesn’t take a huge leap of imagination to see why, when I had to make one of the most important decisions of my carioca life, it was Botafogo that won my allegiance. tf 68

Before cementing my Botafoguense (pron. ‘bota-fo-gain-see) credentials I had to do my research. While Fluminense has got a lovely strip, possibly the bonniest in football, they are the aristocrats of carioca football, ‘the team of the elite’, whereas I grew up on Shields Road, man. Nowt doing. Vasco have got the right colours but I’ve never gotten away with them, neither the club nor the fans. Flamengo very

nearly hooked me, mainly due to my brother-inlaw. I even identified as a Flamenguista before I made the permanent move out here. I was a fan when they won the league in ’09, but following a team that actually won something just felt strange. And then there’s Botafogo. Having initially looked at my options Botafogo were my immediate pick: classic strip, a history strewn with proper bona fide legends,

JOHN MILTON Follow on @ Geordioca the club badge a single star just like England… When I made my feelings public my brother-in-law bought me a genuine-fake ‘Mengo top and dragged me to my first match at the Maracanã where I sat with the Flamenguistas as Flamengo beat Botafogo 1-0. I returned to England claiming to be Flamenguista, but it was a hollow claim – like an atheist going to church every Sunday, keeping up the pretence for www.true-faith.co.uk