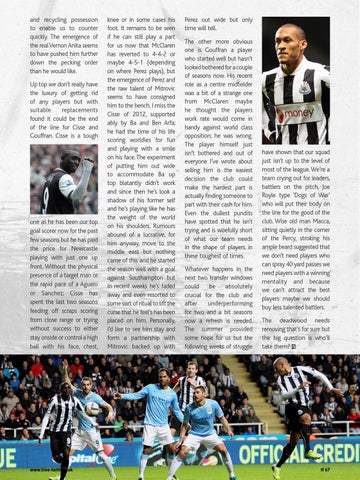 and recycling possession to enable us to counter quickly. The emergence of the real Vernon Anita seems to have pushed him further down the pecking order than he would like. Up top we don’t really have the luxury of getting rid of any players but with suitable replacements found it could be the end of the line for Cisse and Gouffran. Cisse is a tough

one as he has been our top goal scorer now for the past few seasons but he has paid the price for Newcastle playing with just one up front. Without the physical presence of a target man or the rapid pace of a Aguero or Sanchez; Cisse has spent the last two seasons feeding off scraps scoring from close range or trying without success to either stay onside or control a high ball with his face, chest,

knee or in some cases his foot. It remains to be seen if he can still play a part for us now that McClaren has reverted to 4-4-2 or maybe 4-5-1 (depending on where Perez plays), but the emergence of Perez and the raw talent of Mitrovic seems to have consigned him to the bench. I miss the Cisse of 2012, supported ably by Ba and Ben Arfa; he had the time of his life scoring worldies for fun and playing with a smile on his face. The experiment of putting him out wide to accommodate Ba up top blatantly didn’t work and since then he’s look a shadow of his former self and he’s playing like he has the weight of the world on his shoulders. Rumours abound of a lucrative, for him anyway, move to the middle east but nothing came of this and he started the season well with a goal against Southampton but in recent weeks he’s faded away and even resorted to some sort of ritual to lift the curse that he feel’s has been placed on him. Personally, I’d like to see him stay and form a partnership with Mitrovic backed up with

Perez out wide but only time will tell. The other more obvious one is Gouffran a player who started well but hasn’t looked bothered for a couple of seasons now. His recent role as a centre midfielder was a bit of a strange one from McClaren maybe he thought the players work rate would come in handy against world class opposition; he was wrong. The player himself just isn’t bothered and out of everyone I’ve wrote about selling him is the easiest decision the club could make the hardest part is actually finding someone to part with their cash for him. Even the dullest pundits have spotted that he isn’t trying and is woefully short of what our team needs in the shape of players in these toughest of times. Whatever happens in the next two transfer windows could be absolutely crucial for the club and after underperforming for two and a bit seasons now a refresh is needed. The summer provided some hope for us but the following weeks of struggle

have shown that our squad just isn’t up to the level of most of the league. We’re a team crying out for leaders, battlers on the pitch, Joe Royle type ‘Dogs of War’ who will put their body on the line for the good of the club. Wise old man Macca, sitting quietly in the corner of the Percy, stroking his ample beard suggested that we don’t need players who can spray 40 yard passes we need players with a winning mentality and because we can’t attract the best players maybe we should buy less talented battlers. The deadwood needs removing that’s for sure but the big question is who’ll take them?