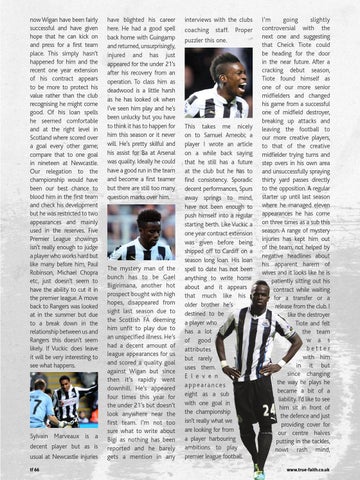 now Wigan have been fairly successful and have given hope that he can kick on and press for a first team place. This simply hasn’t happened for him and the recent one year extension of his contract appears to be more to protect his value rather than the club recognising he might come good. Of his loan spells he seemed comfortable and at the right level in Scotland where scored over a goal every other game; compare that to one goal in nineteen at Newcastle. Our relegation to the championship would have been our best chance to blood him in the first team and check his development but he was restricted to two appearances and mainly used in the reserves. Five Premier League showings isn’t really enough to judge a player who works hard but like many before him, Paul Robinson, Michael Chopra etc, just doesn’t seem to have the ability to cut it in the premier league. A move back to Rangers was looked at in the summer but due to a break down in the relationship between us and Rangers this doesn’t seem likely. If Vuckic does leave it will be very interesting to see what happens.

have blighted his career here. He had a good spell back home with Guingamp and returned, unsurprisingly, injured and has just appeared for the under 21’s after his recovery from an operation. To class him as deadwood is a little harsh as he has looked ok when I’ve seen him play and he’s been unlucky but you have to think it has to happen for him this season or it never will. He’s pretty skilful and his assist for Ba at Arsenal was quality. Ideally he could have a good run in the team and become a first teamer but there are still too many question marks over him.

The mystery man of the bunch has to be Gael Bigirimana, another hot prospect bought with high hopes, disappeared from sight last season due to the Scottish FA deeming him unfit to play due to an unspecified illness. He’s had a decent amount of league appearances for us and scored a quality goal against Wigan but since then it’s rapidly went downhill. He’s appeared four times this year for the under 21’s but doesn’t look anywhere near the first team. I’m not too sure what to write about Bigi as nothing has been reported and he barely gets a mention in any

interviews with the clubs coaching staff. Proper puzzler this one.

This takes me nicely on to Samuel Ameobi; a player I wrote an article on a while back saying that he still has a future at the club but he has to find consistency. Sporadic decent performances, Spurs away springs to mind, have not been enough to push himself into a regular starting berth. Like Vuckic a one year contract extension was given before being shipped off to Cardiff on a season long loan. His loan spell to date has not been anything to write home about and it appears that much like his older brother he’s destined to be a player who has a lot of good attributes but rarely uses them. E l e v e n appearances eight as a sub with one goal in the championship isn’t really what we are looking for from a player harbouring ambitions to play premier league football.

I’m going slightly controversial with the next one and suggesting that Cheick Tiote could be heading for the door in the near future. After a cracking debut season, Tiote found himself as one of our more senior midfielders and changed his game from a successful one of midfield destroyer, breaking up attacks and leaving the football to our more creative players, to that of the creative midfielder trying turns and step overs in his own area and unsuccessfully spraying thirty yard passes directly to the opposition. A regular starter up until last season where he managed eleven appearances he has come on three times as a sub this season. A range of mystery injuries has kept him out of the team, not helped by negative headlines about his apparent harem of wives and it looks like he is patiently sitting out his contract while waiting for a transfer or a release from the club. I like the destroyer Tiote and felt the team w a s better with him in it but since changing the way he plays he became a bit of a liability. I’d like to see him sit in front of the defence and just providing cover for our centre halves putting in the tackles, nowt rash mind, www.true-faith.co.uk