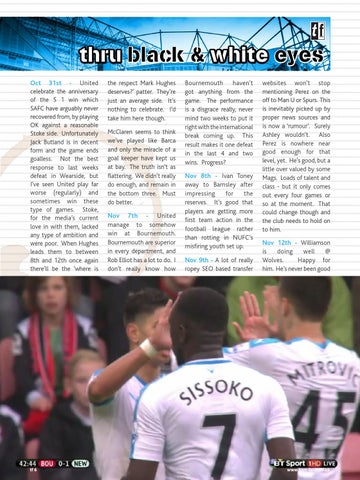 thru black &amp; white eyes Oct 31st - United celebrate the anniversary of the 5 1 win which SAFC have arguably never recovered from, by playing OK against a reasonable Stoke side. Unfortunately Jack Butland is in decent form and the game ends goalless. Not the best response to last weeks defeat in Wearside, but I’ve seen United play far worse (regularly) and sometimes win these type of games. Stoke, for the media’s current love in with them, lacked any type of ambition and were poor. When Hughes leads them to between 8th and 12th once again there’ll be the ‘where is

the respect Mark Hughes deserves?’ patter. They’re just an average side. It’s nothing to celebrate. I’d take him here though. McClaren seems to think we’ve played like Barca and only the miracle of a goal keeper have kept us at bay. The truth isn’t as flattering. We didn’t really do enough, and remain in the bottom three. Must do better. Nov 7th - United manage to somehow win at Bournemouth. Bournemouth are superior in every department, and Rob Elliot has a lot to do. I don’t really know how

Bournemouth haven’t got anything from the game. The performance is a disgrace really, never mind two weeks to put it right with the international break coming up. This result makes it one defeat in the last 4 and two wins. Progress? Nov 8th - Ivan Toney away to Barnsley after impressing for the reserves. It’s good that players are getting more first team action in the football league rather than rotting in NUFC’s misfiring youth set up. Nov 9th - A lot of really ropey SEO based transfer

websites won’t stop mentioning Perez on the off to Man U or Spurs. This is inevitably picked up by proper news sources and is now a ‘rumour’. Surely Ashley wouldn’t. Also Perez is nowhere near good enough for that level, yet. He’s good, but a little over valued by some Mags. Loads of talent and class - but it only comes out every four games or so at the moment. That could change though and the club needs to hold on to him. Nov 12th - Williamson is doing well @ Wolves. Happy for him. He’s never been good