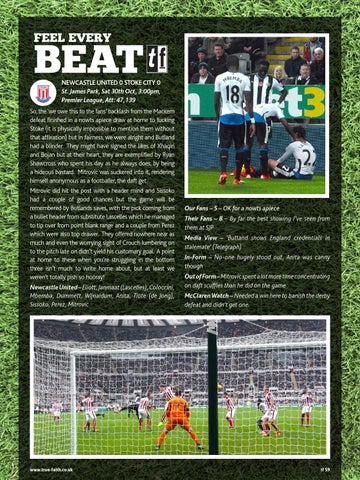 NEWCASTLE UNITED 0 STOKE CITY 0 St. James Park, Sat 30th Oct, 3:00pm, Premier League, Att: 47,139 So, the ‘we owe this to the fans’ backlash from the Mackem defeat finished in a nowts apiece draw at home to fucking Stoke (it is physically impossible to mention them without that affixation) but in fairness, we were alright and Butland had a blinder. They might have signed the likes of Xhaqiri and Bojan but at their heart, they are exemplified by Ryan Shawcross who spent his day as he always does, by being a hideous bastard. Mitrovic was suckered into it, rendering himself anonymous as a footballer, the daft get. Mitrovic did hit the post with a header mind and Sissoko had a couple of good chances but the game will be remembered by Butlands saves, with the pick coming from a bullet header from substitute Lascelles which he managed to tip over from point blank range and a couple from Perez which were also top drawer. They offered nowhere near as much and even the worrying sight of Crouch lumbering on to the pitch late on didn’t yield his customary goal. A point at home to these when you’re struggling in the bottom three isn’t much to write home about, but at least we weren’t totally pish so hooray! Newcastle United – Eliott, Janmaat (Lascelles), Coloccini, Mbemba, Dummett, Wijnaldum, Anita, Tiote (de Jong), Sissoko, Perez, Mitrovic

Our Fans – 5 – OK for a nowts apiece Their Fans – 8 – By far the best showing I’ve seen from them at SJP Media View – ‘Butland shows England credentials in stalemate’ (Telegraph) In-Form – No-one hugely stood out, Anita was canny though Out of Form – Mitrovic spent a lot more time concentrating on daft scuffles than he did on the game McClaren Watch – Needed a win here to banish the derby defeat and didn’t get one.