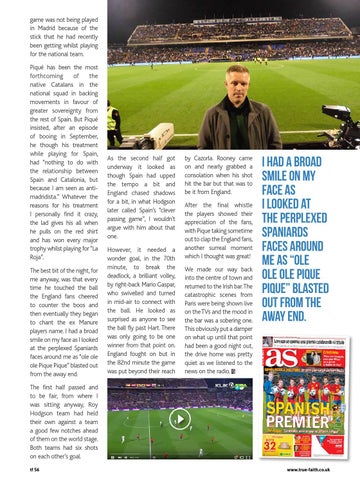 game was not being played in Madrid because of the stick that he had recently been getting whilst playing for the national team. Piqué has been the most forthcoming of the native Catalans in the national squad in backing movements in favour of greater sovereignty from the rest of Spain. But Piqué insisted, after an episode of booing in September, he though his treatment while playing for Spain, had “nothing to do with the relationship between Spain and Catalonia, but because I am seen as antimadridista.” Whatever the reasons for his treatment I personally find it crazy, the lad gives his all when he pulls on the red shirt and has won every major trophy whilst playing for “La Roja”. The best bit of the night, for me anyway, was that every time he touched the ball the England fans cheered to counter the boos and then eventually they began to chant the ex Manure players name. I had a broad smile on my face as I looked at the perplexed Spaniards faces around me as “ole ole ole Pique Pique” blasted out from the away end.

As the second half got underway it looked as though Spain had upped the tempo a bit and England chased shadows for a bit, in what Hodgson later called Spain’s “clever passing game”, I wouldn’t argue with him about that one. However, it needed a wonder goal, in the 70th minute, to break the deadlock, a brilliant volley, by right-back Mario Gaspar, who swivelled and turned in mid-air to connect with the ball. He looked as surprised as anyone to see the ball fly past Hart. There was only going to be one winner from that point on. England fought on but in the 82nd minute the game was put beyond their reach

by Cazorla. Rooney came on and nearly grabbed a consolation when his shot hit the bar but that was to be it from England. After the final whistle the players showed their appreciation of the fans, with Pique taking sometime out to clap the England fans, another surreal moment which I thought was great! We made our way back into the centre of town and returned to the Irish bar. The catastrophic scenes from Paris were being shown live on the TVs and the mood in the bar was a sobering one. This obviously put a damper on what up until that point had been a good night out, the drive home was pretty quiet as we listened to the news on the radio.

I had a broad smile on my face as I looked at the perplexed Spaniards faces around me as “ole ole ole Pique Pique” blasted out from the away end.

The first half passed and to be fair, from where I was sitting anyway, Roy Hodgson team had held their own against a team a good few notches ahead of them on the world stage. Both teams had six shots on each other’s goal. tf 56