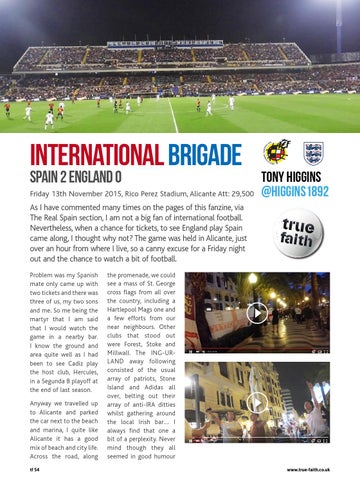 As I have commented many times on the pages of this fanzine, via The Real Spain section, I am not a big fan of international football. Nevertheless, when a chance for tickets, to see England play Spain came along, I thought why not? The game was held in Alicante, just over an hour from where I live, so a canny excuse for a Friday night out and the chance to watch a bit of football. Problem was my Spanish mate only came up with two tickets and there was three of us, my two sons and me. So me being the martyr that I am said that I would watch the game in a nearby bar. I know the ground and area quite well as I had been to see Cadiz play the host club, Hercules, in a Segunda B playoff at the end of last season. Anyway we travelled up to Alicante and parked the car next to the beach and marina, I quite like Alicante it has a good mix of beach and city life.Â Across the road, along tf 54

the promenade, we could see a mass of St. George cross flags from all over the country, including a Hartlepool Mags one and a few efforts from our near neighbours. Other clubs that stood out were Forest, Stoke and Millwall. The ING-URLAND away following consisted of the usual array of patriots, Stone Island and Adidas all over, belting out their array of anti-IRA ditties whilst gathering around the local Irish barâ&amp;#x20AC;Ś I always find that one a bit of a perplexity. Never mind though they all seemed in good humour www.true-faith.co.uk