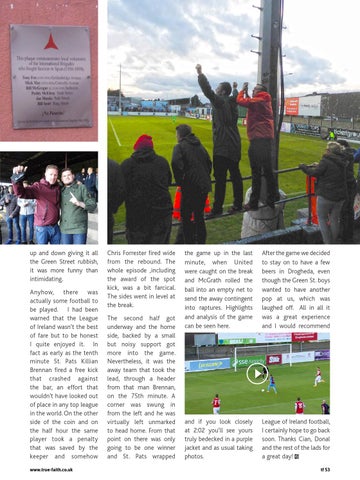 up and down giving it all the Green Street rubbish, it was more funny than intimidating. Anyhow, there was actually some football to be played. I had been warned that the League of Ireland wasn’t the best of fare but to be honest I quite enjoyed it. In fact as early as the tenth minute St. Pats Killian Brennan fired a free kick that crashed against the bar, an effort that wouldn’t have looked out of place in any top league in the world. On the other side of the coin and on the half hour the same player took a penalty that was saved by the keeper and somehow www.true-faith.co.uk

Chris Forrester fired wide from the rebound. The whole episode ,including the award of the spot kick, was a bit farcical. The sides went in level at the break. The second half got underway and the home side, backed by a small but noisy support got more into the game. Nevertheless, it was the away team that took the lead, through a header from that man Brennan, on the 75th minute. A corner was swung in from the left and he was virtually left unmarked to head home. From that point on there was only going to be one winner and St. Pats wrapped

the game up in the last minute, when United were caught on the break and McGrath rolled the ball into an empty net to send the away contingent into raptures. Highlights and analysis of the game can be seen here.

After the game we decided to stay on to have a few beers in Drogheda, even though the Green St. boys wanted to have another pop at us, which was laughed off. All in all it was a great experience and I would recommend

and if you look closely at 2:02 you’ll see yours truly bedecked in a purple jacket and as usual taking photos.

League of Ireland football, I certainly hope to go back soon. Thanks Cian, Donal and the rest of the lads for a great day! tf 53